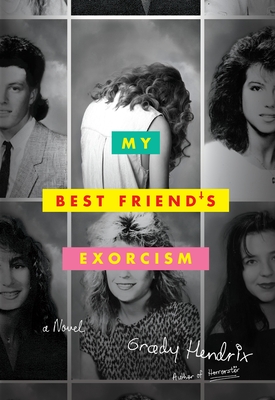 Soon to be a major motion picture.

From the New York Times best-selling author of The Southern Book Club's Guide to Slaying
Vampires, this unholy hybrid of Beaches and The Exorcist blends teen angst and unspeakable horrors into a pulse-pounding supernatural thriller.

The year is 1988. High school sophomores Abby and Gretchen have been best friends since fourth grade. But after an evening of skinny-dipping goes disastrously wrong, Gretchen begins to act…different. She’s moody. She’s irritable. And bizarre incidents keep happening whenever she’s nearby. Abby’s investigation leads her to some startling discoveries—and by the time their story reaches its terrifying conclusion, the fate of Abby and Gretchen will be determined by a single question: Is their friendship powerful enough to beat the devil?

Praise For My Best Friend's Exorcism: A Novel…

“Take The Exorcist, add some hair spray and wine coolers, and enroll it in high school in 1988 — that’ll give you My Best Friend’s Exorcism...Campy. Heartfelt. Horrifying.”—Minnesota Public Radio

“Terrific...Sharply written...[My Best Friend’s Exorcism] makes a convincing case for [Hendrix’s] powers as a sharp observer of human behavior, filtered through a fun genre conceit that doesn’t skimp on the spooky—or the bodily fluids.”—The A.V. Club

“My Best Friend’s Exorcism is perfectly spooky, catty fun while simultaneously bringing forth a greater message about friendship, religion, self-image, and the undeniable power of Phil Collins.”—Collider

“The perfect mix of '80s nostalgia and scares.”—POPSUGAR

“My Best Friend’s Exorcism has the same throwback vibes [as Stranger Things] and a vintage-looking cover to boot.”—Reader’s Digest

“This book packs all the magic of a summer horror flick.”—Bustle

“If you’re looking for a good summer book, something for the beach or the back porch that won’t insult your intelligence, one that’s tense and sometimes scary and sometimes funny, with characters you may even come to like and admire as they come of age, keep My Best Friend’s Exorcism in mind.”—SFFWorld

“Hendrix’s darkest novel yet will leave readers begging for an encore.”—Booklist, starred review, on We Sold Our Souls

“A good, creepy, music-tinged thriller.”—CNET, on We Sold Our Souls

Grady Hendrix is an award-winning and New York Times best-selling novelist and screenwriter living in New York City. He is the author of Horrorstör, My Best Friend’s Exorcism (which is being adapted into a feature film by Amazon Studios), We Sold Our Souls, The Southern Book Club’s Guide to Slaying Vampires, and The Final Girl Support Group. Grady also authored the Bram Stoker Award–winning nonfiction book Paperbacks from Hell and These Fists Break Bricks: How Kung Fu Movies Swept America and Changed the World.

2. The book takes place during the Cold War and era of “satanic panic” when there was a sense that the United States was vulnerable to just about any type of evil. How do you think this historical backdrop affects the behavior of the characters?

3. Music is at the center of Abby and Gretchen’s friendship. What ’80s song do you relate most with?

4. E.T. the Extra-Terrestrial is a large part of Abby’s life. In what other ways does ’80s pop culture inform Abby and Gretchen’s friendship?

5. We’re introduced to the friendship between the four girls—Abby, Gretchen, Margaret, and Glee—fairly early on in the novel. What were your first impressions of the clique?

6. The girls’ decision to drop acid is a turning point in the novel. How do you think this rite of passage affects the girls’ relationships?

7. Abby and Gretchen come from different sides of the tracks. How do you think this affects their relationship as they grow up?

8. Gretchen, while under the influence of the devil, does a lot of terrible things. Which do you think is the worst?

9. Abby is a devoted friend. How far would you go if your best friend was possessed by the devil?