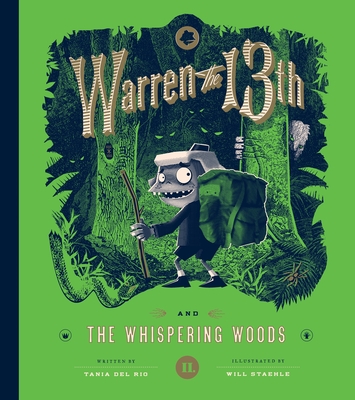 Warren the 13th and the Whispering Woods

Warren the 13th is back in another lushly illustrated middle grade adventure in the spirit of Edward Gorey and Lemony Snicket.

Twelve-year-old Warren has learned that his beloved hotel can walk, and now it’s ferrying guests around the countryside, transporting tourists to strange and foreign destinations. But when an unexpected detour brings everyone into the dark and sinister Malwoods, Warren finds himself separated from his hotel and his friends—and racing after them on foot through a forest teeming with witches, snakes, talking trees, and mind-boggling riddles. This fast-paced and beautifully-designed sequel to Warren the 13th and the All-Seeing Eye is packed with nonstop action, adventure, and mystery for middle grade readers.

Praise For Warren the 13th and the Whispering Woods: A Novel…

“Del Rio delivers another rollicking adventure with this sequel...Staehle’s abundant etchinglike illustrations play on the story’s humor and drama, resulting in a mystery that is fresh and imaginative.”—Booklist

“In a double-columned narrative festooned throughout with macabre green-and-black illustrations that thicken the Gothic air considerably…dismal turns abound…. Another entry in the ‘unfortunate events’ genre, kitted out with atmospheric art, unusual book design, and a wonderfully homely protagonist.”–Kirkus Reviews

“Our son has never in his life been hooked on a book more than with Warren the 13th.”—Dad Suggests

Tania del Rio is the author of the Warren the 13th series. A professional comic book writer and artist, her clients include Archie Comics, Dark Horse, and Marvel. She is best known for her work writing and drawing a 42-issue run of Sabrina the Teenage Witch. She lives in Los Angeles. Will Staehle is the illustrator and designer of the Warren the 13th series, plus dozens of award-winning book jackets. Print magazine named him one of the Top Twenty under Thirty New Visual Artists. He lives in Seattle, WA.
Loading...
or
Not Currently Available for Direct Purchase