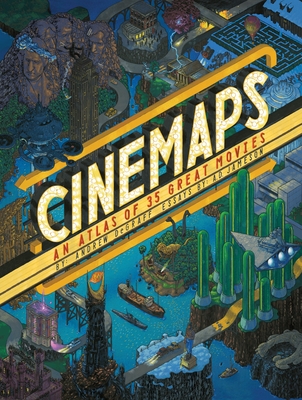 An Atlas of 35 Great Movies

This beautifully illustrated atlas of beloved movies is an essential reference for cinephiles, fans of great films, and anyone who loves the art of mapmaking.

Acclaimed artist Andrew DeGraff has created beautiful hand-painted maps of all your favorite films, from King Kong and North by Northwest to The Princess Bride, Fargo, Pulp Fiction, even The Breakfast Club—with the routes of major characters charted in meticulous cartographic detail. Follow Marty McFly through the Hill Valley of 1985, 1955, and 1985 once again as he races Back to the Future. Trail Jack Torrance as he navigates the corridors of the Overlook Hotel in The Shining. And join Indiana Jones on a globe-spanning journey from Nepal to Cairo to London on his quest for the famed Lost Ark. Each map is presented in an 9-by-12-inch format, with key details enlarged for closer inspection, and is accompanied by illuminating essays from film critic A. D. Jameson, who speaks to the unique geographies of each film.

Praise For Cinemaps: An Atlas of 35 Great Movies…

“Artist Andrew DeGraff has found a way to transport you directly into the terrain of your favorite films with gorgeous hand-painted maps.”—Slash Film

“[DeGraff’s] maps reveal our favorite films as dynamic, complex organisms—simultaneously aging and timeless—and give fans an imaginative new route into the films they love.”—Playboy

“This one-of-a-kind atlas is a must for both film buffs and art lovers.”—Parade

“The cartographically inclined won't be able to resist this collection of maps charting Marty McFly's coming and goings in Hill Valley, Indiana Jones's globetrotting, and more from 35 iconic films.”—Town & Country

“These maps aren't drawn to scale, but what they lack in rigorous precision they more than make up for in color, clarity and crazily detailed thoroughness.”—Glen Weldon, Pop Culture Happy Hour

“An essential reference for cinephiles, fans of great films, and anyone who loves the art of mapmaking.”—Tor.com

“DeGraff infuses his array of blockbusters and pop classics with detail-oriented warmth.”—Film Comment

“A unique gift for the movie lover in your life.”—Hypable

“A treasure …[Cinemaps] will entice movie fans across generations with its visual tidbits and analytical essays.”—Geeks of Doom

“If you haven’t already rushed out to buy this book, then I suggest you get on that.”—All Geek to Me

Andrew DeGraff has created illustrations for the New York Times, Sports Illustrated, Esquire, and other national publications. His previous book, Plotted, was hailed by Slate as “beautifully illustrated . . . an innovative work of literary criticism.”

A. D. Jameson is an author and Ph.D. candidate at the University of Illinois at Chicago, where he teaches writing and film studies.
Loading...
or support indie stores by buying on