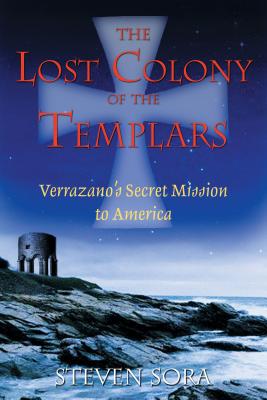 The Lost Colony of the Templars (Paperback)

Reveals the existence of a Templar colony in the New World and how the explorer Verrazano, also a member of a secret society, attempted to reestablish contact with it

• Reveals the hidden knowledge preserved in the Templar baptisteries found throughout Europe and in Newport, Rhode Island

In 1524 the Italian explorer Giovanni da Verrazano was sent by the French king Francis I on an expedition ostensibly to find a shorter route to China. However, his true mission, Steven Sora suggests, was to contact a Templar colony that might have been established in Newport, Rhode Island, by Henry Sinclair at the end of the 14th century. In his expedition log Verrazano recorded that his only stay on this journey was at Newport Harbor, the site of a tower built to the exact measurements of a Templar baptistery, a sacred sanctuary representing baptism and eternal life.

This tower is a remnant of Sinclair’s voyage to America nearly a century before that of Columbus (who had access to Sinclair’s maps thanks to his wife, who was Sinclair’s great-granddaughter). While Verrazano’s mission succeeded in finding the tower, the colony itself eluded him. His backers then decided to resurrect the dream of Acadia--a place where they could aspire to higher knowledge without fear of Church or state--by creating a new Secret Society that included Huguenots and Catholic Sulpicians. This Company of the Holy Sacrament would lay the foundations for Montreal in an attempt to realize the ambitions of Sinclair and his Templar companions, as well as to stave off efforts by the Jesuits to transform Quebec into a fiefdom of the orthodox Church. Quebec’s motto, “Je me souviens” (I remember), is a reference to this secret history.

Steven Sora has been researching historical enigmas since 1982 and is the author of The Triumph of the Sea Gods, The Lost Treasure of the Knights Templar and Secret Societies of America’s Elite. He lives in Allentown, Pennsylvania.

Praise For The Lost Colony of the Templars: Verrazano's Secret Mission to America…

"The name Verrazano might be recognized as tied to a bridge. But Giovanni Da Verrazano is otherwise a footnote in the history of American discovery and exploration--basically insignificant in the mainstream teaching of history.

"Steven Sora is a writer and researcher dedicated to looking behind the traditional gloss towards a history that is either ignored or covered up or both. Of course history really isn't even taught now [in the high schools] and what is is usually a revisionist politically correct version.

"In his best book yet, Mr. Sora does fabulous detective work and delivers mountains of facts, dates, quotes, and more, all in his theory that the visit of Verrazano was not what it purported to be. Sora shows that the Italian explorer [sent by French King Francis I] was not looking for a 'shorter route to China' but travelled in 1524 to investigate a lost Templar Colony.

"Slowly Sora builds a case for his theory but also gives us a book that goes well beyond Verrazano. Actually most of the book covers those forgotten or ignored or downplayed facts of American and European history that have great bearing [and/or connection] on some of the most important events in time. The author explores a wide range of subjects and events such as the Templars and other secret groups, the Roman church and its myriad confusing and divided 'orders' [read sects], the interplay between Church and State, the Crusades, the wars with Islam, the persecution of 'heretics' [including simple Christians], the anti-Semitism and the war against the Jews, secret treasures, Bible legends, ancient mysteries, facts about Jesus and the Holy Family, secret societies, ancient maps, Columbus, and on and on.

"'The Lost Colony' reads like a thriller but is fact. It crosses ground with 'The DA VINCI CODE' but this is not fiction. Sora actually gives the reader a quick and mind- blowing lesson into the ignored and/or downplayed facts and events and connections of a history that is not that long ago. The author may well have put together the best starting point to explore our past, the early discoveries of America, the survival of the Knight's TEMPLARS, the stories of [often persecuted] men and women in and out of the Roman Church who wanted truth and justice, and the many ignored events of fairly recent history that echo facts from the ancient past.

"For the student of the TEMPLARS, of Mystery Orders, of a Christian movement somewhat Reformed [not Roman] before the Reformation, of the legends of the Holy Family, of the Grail, of Mary Magdalene, and of Jesus and His Apostles, this is a great starting point. THE DAVINCI CODE only captures a slice of history and speculates but Sora presents tons of material and food-for-thought for further research. While I may not always agree with Mr. Sora's interpretations, I think he has done some very solid work that bears examination and calls for more careful scholarship and fresh research.

"I have been a Bible student/researcher for almost 33 years and have covered alot of ground as concerns church history and various religious movements. 'Lost Colony' had fresh sources and info, along with tidbits of delight [word meanings and place names] as well as gems of data and useful information. Add to that clues that point to new vistas and material that deserves heavy historical, archaeological, and inter- disciplinary study. There's commentary on early maps and sea routes, ignored alliances, unlikely religious connections, ancient legends, historic and legendary voyages of discovery and escape, incredible coincidences, and...well I could go on and on. One example of how information is put together to reach a conclusion is his material on the Columbus-[Henry] Sinclair connection and how these two discoverers [Sinclair found Nova Scotia] and their families became tied together in marriage. An incredible fact that historians somehow overlook! This leads us to a huge can of worms [for the traditionalist] that points to an even more complex understanding of the real discovery of 'America' and how/why the great political and religious intrigue that underpinned the times.

"'LOST COLONY' is a great look into the great unknown and/or misunderstood history of the 'New World' and the 'Indies.' It is must reading for any and every person who would understand some of the great mysteries not just of the past 500 years but maybe of the past 2000. The work gives us a taste of a rich, complex, and mysterious heritage and history that needs to be understood in a time when history, reading, and study are belittled and unpopular and there's less chance that students and others will want to do the hard work of discovery. This book may help us to find the 'keys' that open the doors to a historical, documentable hidden history. It is must reading and I highly recommend it--a fascinating couldn't-put-it-down work."
— A. Canales, The Critical Review, June, 2005

“Steven Sora has once again confirmed his position as one of only a handful having the ‘ability to see’ the signs along the path of the Knights Templar in America. This book is a fascinating blend of innovative theories based on historical fact that will appeal to any reader who quests for understanding of the Holy Bloodline.”
— William F. Mann, author of The Knights Templar in the New World

"Only rarely do you find a book which could change the way we look at our history: this is one of those books. . . . The Lost Colony of the Templars deserves a place of honor on your shelves."
— Kevin Filan, Mysteries Magazine, Vol. 3, #4, Issue #11

". . . this book, which covers an immense range of topics, is really about one thing: a basic change in the nature of human consciousness."
— Colin Wilson, The Daily Grail, Nov 2005
or support indie stores by buying on
Copyright © 2020 American Booksellers Association