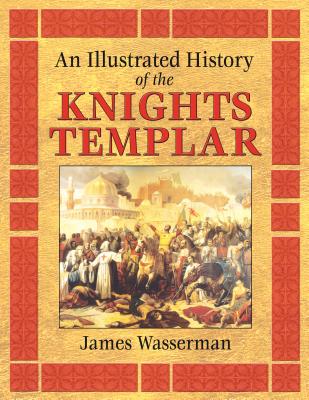 An Illustrated History of the Knights Templar

A lavishly illustrated, comprehensive look at the mysterious history of the Order of the Knights Templar

• Presents the myths and historical truths of the Knights Templar, the elite warrior army of the pope who were destroyed as heretics some 700 years ago

Despite the increasing scholarship devoted to the study of the Templar order, founded in 1119, the mystery surrounding the Templars endures. Secret societies from the Freemasons to the Ordo Templi Orientis claim descent from this religious order of warrior-monks. As the private army of the pope, the Knights Templar were initially established to protect Christian pilgrims traveling to the Holy Land but grew to become one of the most powerful organizations in the Middle Ages. With period illustrations from manuscripts from the Crusades, interpretive romantic paintings from the 18th and 19th centuries, and contemporary photos by Steven Brooke and others of former Templar strongholds in Europe and Jerusalem, James Wasserman, author of the bestselling The Templars and the Assassins, provides a fascinating history of the Order and the many mysteries and legends that surround it.

Wasserman presents the evidence for the Templar connection to mystical Islamic organizations such as the Assassins as well as their ties to “heretical” groups such as the Cathars, who were targeted by a crusade in southern France to expunge the challenge they presented to the orthodoxy of their time. In addition to providing an overview of the Templars’ actions during the Crusades, Wasserman revisits the trial and the charges leveled against them, showing how the Order was ruthlessly crushed. He also explores the nature of the treasure they left behind, which has fueled popular imagination for centuries.

Praise For An Illustrated History of the Knights Templar…

“James Wasserman has gathered the most beautiful, authoritative, and complete collection of Crusader and Templar images available anywhere. But this is not just a picture book. Wasserman’s text also gives us an exceptionally clear, historically accurate, and esoterically true account of the history of this most mysterious of medieval knightly Orders. His sense of the way in which Templar esotericism fuses Judaic, Islamic (Ismaili), and Christian elements is a welcome and convincing alternative to the usual conditioned view that sees the three great religions separate and opposed.”
— Christopher Bamford, author of An Endless Trace: The Passionate Pursuit of Wisdom in the West

"History is the blended story of individuals, issues, and the times in which they existed. Wasserman has done an excellent job of defining the times of the Knights Templar, the political climate, the position of the Church, as well as giving us the background of the men that were involved in the tradition."
— Bonnie Cehovet, Angelfire.com, Oct 2006

". . . this book sets an excellent foundation for research and understanding of this tradition."
— Bonnie Cehovet, Angelfire.com, Oct 2006

"AN ILLUSTRATED HISTORY OF THE KNIGHTS TEMPLAR makes the most of visuals from all centuries and is a recommended pick for any new age collection, even those who already have several books on the topic. Little is duplicated, here."
— Diane C. Donovan, California Bookwatch, Feb 2007

James Wasserman (1948-2020) was the author of several books, including The Templars and the Assassins, The Secrets of Masonic Washington, The Mystery Traditions, An Illustrated History of the Knights Templar, and The Temple of Solomon. A longtime student of the occult, the United States Constitution, and the writings of the Founding Fathers as well as a member of the Ordo Templi Orientis since 1976, he lived in New York City.
Loading...
or support indie stores by buying on