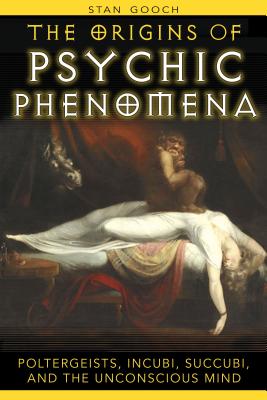 The Origins of Psychic Phenomena

• Shows how the cerebellum--the seat of the unconscious--is the source of these energies, subpersonalities, and manifestations

Alien abduction, poltergeist attacks, incubi, succubi, split and multiple personalities, possessions, precognition, spontaneous combustion--the list of phenomena not just unexplained but ignored by mainstream science seems endless. Yet the key to the origin of all these manifestations lies deep within our own brains.

In The Origins of Psychic Phenomena, Stan Gooch explores the functioning of the dream-producing part of the brain--the cerebellum--and how the unconscious mind is able to externalize itself. The cerebellum is the physical seat of the unconscious and was once equal to or even superior to the cerebrum as essential to our functioning. In modern times it has been shunted into the subliminal, yet the cerebellum continues to process our worldly experiences and reveals its concerns in misunderstood, often frightening, manifestations. Gooch explains that Neanderthal Man possessed a much larger cerebellum than Cro-Magnon Man and posits that the modern repression of the cerebellum’s role in our consciousness has given rise to these supernatural phenomena.

Praise For The Origins of Psychic Phenomena: Poltergeists, Incubi, Succubi, and the Unconscious Mind…

“The Origins of Psychic Phenomena is an interesting read no matter where you stand on belief in extraordinary phenomena. The field remains fraught with mysteries, especially those dealing with succubi and incubi.”
— Fred Alan Wolf, Ph.D., author of The Spiritual Universe

“I have long felt that Stan Gooch is one of the most brilliant paranormal investigators of the past century.”
— Colin Wilson, author of The Occult and The Outsider

“If you are looking to have a much better understanding of some of the most difficult and obscure areas of the human psyche and how the unconscious makes sense of the world we live in, then pick up a copy of Origins.”
— Mark Stavish, Institute for Hermetic Studies, April 2007

". . . validates the reality of psychic phenomena, while at the same time affirming the depth of the individual psyche--the House of the Soul."
— Parallel Perspectives, April 2007

"If you are looking for something unusual about the origins of psychic phenomena, poltergeists, incubi, succubi, and the subject of the unconscious mind, then Stan Gooch's well-written book is for you."
— Lee Prosser, Ghostvillage.com, May 2007

". . . covers a wide variety of phenomena beyond those listed in the title. . . . excellent arguments and rationale."
— D. Tigermoon, The Pagan Review, Oct 2007

" . . . will not only make us more receptive to these cerebellar communiques but also encourage us to derive benefit from them in the form of increased awareness, heightened intuition, and psychological equilibrium."
— Jay Beldo, Mysteries, Issue 22, Nov/Dec 2008

Stan Gooch began his career as a highly regarded psychological researcher who studied the evolution and history of the brain in his books Total Man and Personality and Evolution. His research on paranormal influences and Neanderthal culture appear in his books The Neanderthal Legacy, Dream Culture of the Neanderthals, The Origins of Psychic Phenomena, The Double Helix of the Mind, Cities of Dreams, and The Secret Life of Humans. He passed away in 2010.
Loading...
or
Not Currently Available for Direct Purchase