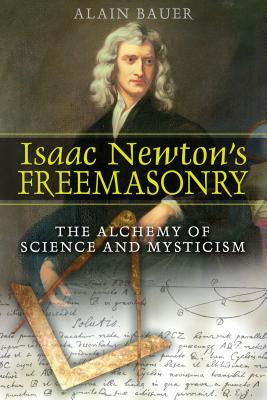 The Alchemy of Science and Mysticism

• Shows that Freemasonry, as a mystical order, was conceived as something new--an amalgam of alchemy and science that had little to do with operative Freemasonry

• Reveals how Newton and his friends crafted this “speculative,” symbolic Freemasonry as a model for the future of England

• Connects Rosslyn Chapel, Henry Sinclair, and the Invisible College to Newton and his role in 17th-century Freemasonry

Freemasonry, as a fraternal order of scientists and philosophers, emerged in the 17th century and represented something new--an amalgam of alchemy and science that allowed the creative genius of Isaac Newton and his contemporaries to flourish. In Isaac Newton’s Freemasonry, Alain Bauer presents the swirl of historical, sociological, and religious influences that sparked the spiritual ferment and transformation of that time. His research shows that Freemasonry represented a crossroads between science and spirituality and became the vehicle for promoting spiritual and intellectual egalitarianism. Isaac Newton was seminal in the “invention” of this new form of Freemasonry, which allowed Newton and other like-minded associates to free themselves of the church’s monopoly on the intellectual milieu of the time.

This form of Freemasonry created an ideological blueprint that sought to move England beyond the civil wars generated by its religious conflicts to a society with scientific progress as its foundation and standard. The “science” of these men was rooted in the Hermetic tradition and included alchemy and even elements of magic. Yet, in contrast to the endless reinterpretations of church doctrine that fueled the conflicts ravaging England, this new society of Accepted Freemasons provided an intellectual haven and creative crucible for scientific and political progress. This book reveals the connections of Rosslyn Chapel, Henry Sinclair, and the Invisible College to Newton’s role in 17th-century Freemasonry and opens unexplored trails into the history of Freemasonry in Europe.

Alain Bauer, a researcher and historian, is the current Grand Master of the Grand Orient of France. He is the author in French of Grand O and Le Grand Orient de France.

Praise For Isaac Newton's Freemasonry: The Alchemy of Science and Mysticism…

". . . tells the tale of how this famous first scientist envisioned expressing spirituality through the scientific method."
— Venture Inward, Nov/Dec 2007

"Here, French historian Alain Bauer . . . reviews the history and origins of operative and speculative Freemasonry in England and points out where so many other authors over the centuries have erred in their interpretations."
— Nexus, Mar/Apr 2008

"This slim volume, written under the authority of the Masonic Institute of France, with a foreword by the Grand Master of the Grand Lodge of France, provides a comprehensive story of Freemasonry."
— The Beacon, Jan/Mar 2008

"The scholarly research behind the book is apparent in the very in-depth information provided in the appendix, notes, and bibliography. I would recommend this work to anyone who is endeavoring to add more knowledge to their understanding of the historical formation of Freemasonry."
— Veritas Newsletter, July 2008
or support indie stores by buying on
Copyright © 2020 American Booksellers Association