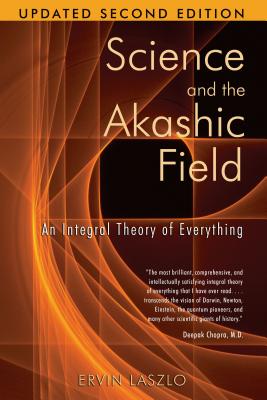 Science and the Akashic Field

An Integral Theory of Everything

Presents the unifying world-concept long sought by scientists, mystics, and sages: an Integral Theory of Everything

Mystics and sages have long maintained that there exists an interconnecting cosmic field at the roots of reality that conserves and conveys information, a field known as the Akashic record. Recent discoveries in vacuum physics show that this Akashic Field is real and has its equivalent in science’s zero-point field that underlies space itself. This field consists of a subtle sea of fluctuating energies from which all things arise: atoms and galaxies, stars and planets, living beings, and even consciousness. This zero-point Akashic Field is the constant and enduring memory of the universe. It holds the record of all that has happened on Earth and in the cosmos and relates it to all that is yet to happen.

In Science and the Akashic Field, philosopher and scientist Ervin Laszlo conveys the essential element of this information field in language that is accessible and clear. From the world of science he confirms our deepest intuitions of the oneness of creation in the Integral Theory of Everything. We discover that, as philosopher William James stated, “We are like islands in the sea, separate on the surface but connected in the deep.”

Praise For Science and the Akashic Field: An Integral Theory of Everything…

“A seminal book from one of the best thinkers of our time. Ervin Laszlo charts the ­frontiers to which science is inexorably headed. In years to come people will look back at the amazing foresight of this work.”
— Peter Russell, fellow of the Institute of Noetic Sciences and the Findhorn Foundation and author of

". . . Laszlo's new book is a provocative overview and a masterful synthesis of knowledge at the frontiers of cosmology, physics, neurobiology, and consciousness studies. . . . provides strong support for the idea that finally we have a common unifying concept for science and spirituality."
— Christian De Quincey, Ph.D., Shift, Mar-May, 2005

". . . will be of aid to those students interested in utilising modern science to explain the subtle and unseen."
— The Beacon, Mar-Apr, 2005

". . . highly empirical and impressive . . . manages to reveal the connectivity of a wide range of established principles . . . . expands the mind to the point that readers will exit this changed."
— New Age Retailer, Trade Show Issue 2005, Vol. 19, No. 4

“Ervin Laszlo presents readers with a tour de force, nothing less than a theory of everything. This book introduces such provocative concepts as the 'A-field' and the 'informed universe,' making the case that a complete understanding of reality is woefully lacking without them. Readers of this book will never view the universe in quite the same way again.”
— Stanley Krippner, Ph.D., professor of psychology, Saybrook Graduate School, and author and co-editor

“Over the last 30 years, Ervin Laszlo has consistently been at the forefront of scientific inquiry, exploring the frontiers of knowledge with insight, wisdom and integrity. With Science and the Akashic Field he takes another quantum leap forward in our understanding of the universe and ourselves. This enthralling vision of mind, science, and universe is essential reading for the 21st century.”
— Alfonso Montuori, Ph.D., California Institute of Integral Studies, and author of Creators on Creatin

“It is rare indeed that a revolution in thought can open our eyes to a new universe that transforms our inner experience as well as our relationships with others and even with the cosmos. Martin Buber did it with I and Thou. Now, Ervin Laszlo, one of the most profound minds of our generation, has given us a great gift in this readable book that explores how we are connected to each other in fields of resonance that penetrate to the deepest levels of being.”
— Allan Combs, Ph.D., professor of psychology, University of North Carolina at Asheville, and author o

“In this impressive and transformative work Laszlo brings the reader into an integral worldview for our time. The reader who encounters this book will be irrevocably transformed and will henceforth experience the world through a global lens.”
— Ashok Gangadean, Ph.D., professor of philosophy, Haverford College, founder-director of the Global D

“In a visionary way based on profound knowledge of modern science, Laszlo creates a genuine architecture of human and cosmic evolution. He provides the bridge between all the different puzzle-stones of science and unifies them in a most remarkable and bold ‘integral theory of everything.’”
— Fritz-Albert Popp, Ph.D., director of the International Institute of Biophysics and editor of Recent

“This is one of the most important books to be published in the last decades. Ervin Laszlo’s Science and the Akashic Field has the power and coherence to explain the major phenomena of cosmos, life, and mind as they occur at the various levels of nature and society. In demonstrating that an information field is a fundamental factor in the universe, Ervin Laszlo catalyzes a radical paradigm-shift in the contemporary sciences.”
— Ignazio Masulli, Ph.D., professor of history, University of Bologna, Italy, and coauthor of The Evol

“Laszlo’s book opens the way toward a great synthesis. Whoever reads Laszlo’s book witnesses the greatest awakening of the human spirit. Not since Plato and Democritus has there been such a transformation in the history of thought!”
— László Gazdag, Ph.D., physicist and professor of Social Sciences, Science University of P&

“In his admirable 40-year quest for an integral theory of everything, Laszlo has. . . presented a coherent global hypothesis of connectivity between quantum, cosmos, life and consciousness."
— Zev Naveh, Ph.D., professor emeritus, Israel Institute of Technology, and author of Landscape Ecolog

"Science and the Akashic Field provides the pioneering scientific answer to . . . fundamental questions our species faces at this critical time in human evolution.”
— David Loye, Ph.D., former research director of the Program on Psychosocial Adaptation and the Future

“Science and the Akashic Field . . . . offers humanity the perspective of more peace and security, not as an idealistic goal but as a reflection of reality.”
— Jurriaan Kamp, editor in chief of Ode Magazine and author of Because People Matter

“. . . Ervin Laszlo’s brilliant new work, Science and the Akashic Field, surpasses previous explorations. . . . This is a 'make-sense-of-the-complex' opus, accessible to every reader.”
— A. Harris Stone, Ed.D., founder of The Graduate Institute in Milford, Connecticut, and author of The

“This is a solidly grounded vision of our cosmos, with perspectives that are wide and deep and have profound implications for all of us.”
— Henrik B. Tschudi, chairman of the Flux Foundation, Oslo, Norway

“If you ever wanted to hold the universe in your hand . . . . You can hardly do better than join cosmologist Ervin Laszlo in the ultimate quest: for a theory of everything.”
— Christian de Quincey, Ph.D., professor of philosophy, John F. Kennedy University, editor of Institut

“Ervin Laszlo is, arguably, the most profound thinker alive today.”
— Lady Montagu of Beaulieu, First Ambassador of the Club of Budapest

"Decoding GUTs, WIMPs, and The Big Crunch, Ervin Laszlo brings the ancient Indian concept of akasha into the new millennium and convincingly details how science is turning this metaphor into a viable scientific theory.”
— Spirit of Change, March-April 2005

“This important work unifies the realms of science and consciousness in a truly integral ‘theory of everything.’”
— Ralph Abraham, Ph.D., professor of mathematics, University of California, and coauthor of Chaos, Cre

"With extraordinary intellectual clarity, Laszlo provides a vision that links the best of modern science to the wisdom of the great spiritual traditions."
— Stanislav Grof, M.D., Ph.D., president and founder of the International Transpersonal Association an

"Laszlo easily and ably presents the scientific case in terms everyone can understand. There is an extensive bibliography of technical journals for those who wish to know more."
— W. Ritchie Benedict, New Dawn

Ervin Laszlo is a philosopher and systems scientist. Twice nominated for the Nobel Peace Prize, he has published more than 75 books and over 400 articles and research papers. The subject of the one-hour PBS special Life of a Modern-Day Genius, Laszlo is the founder and president of the international think tank the Club of Budapest and of the prestigious Laszlo Institute of New Paradigm Research. The winner of the 2017 Luxembourg Peace Prize, he lives in Tuscany. In 2019, Ervin Laszlo was cited as one of the "100 Most Spiritually Influential Living People in the World" according to Watkins Mind Body Spirit magazine.
Loading...
or support indie stores by buying on