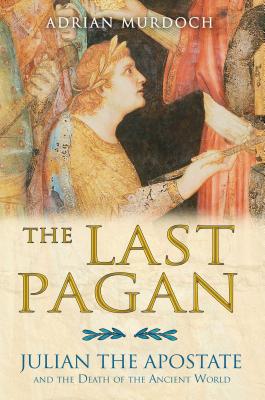 Julian the Apostate and the Death of the Ancient World

A history of Julian, the grandson of Constantine, and his failed attempt to reverse the Christian tide that swept the Roman Empire

• Portrays the “Apostate” as a poet-philosopher, arguing that had he survived, Christianity would have been checked in its rise

• Details reforms enacted by Julian during his two-year reign that marginalized Christians, effectively limiting their role in the social and political life of the Empire

• Shows how after Julian’s death the Church used paganism to represent evil and opposition to God, a tactic whose traces still linger

The violent death of the emperor Julian (Flavius Claudius Julianus, AD 332-363) on a Persian battlefield has become synonymous with the death of paganism. Vilified throughout history as the “Apostate,” the young philosopher-warrior was the last and arguably the most potent threat to Christianity.

The Last Pagan examines Julian’s journey from an aristocratic Christian childhood to his initiation into pagan cults and his mission to establish paganism as the dominant faith of the Roman world. Julian’s death, only two years into his reign, initiated a culture-wide suppression by the Church of all things it chose to identify as pagan. Only in recent decades, with the weakening of the Church’s influence and the resurgence of paganism, have the effects of that suppression begun to wane. Drawing upon more than 700 pages of Julian’s original writings, Adrian Murdoch shows that had Julian lived longer our history and our present-day culture would likely be very different.

Praise For The Last Pagan: Julian the Apostate and the Death of the Ancient World…

“A thoroughly engaging book about one of the fourth century’s most interesting emperors.”
— The Journal of Classics Teaching

“Keenly paced and beautifully written . . . quite simply one of the best historical biographies of the year.”
— Catholic Herald

“Friendly to its controversial subject and an easy read.”
— Church Times

"Although this is a book written for the general reading public, and not particularly aimed at Pagan readership, it contains a wealth of information concerning Pagan/Christian relations. It also shows a number of concerns expressed by Julian that are still valid today. . . . This is an excellent book, and I highly recommend it to everyone."
— Michael Gleason, Witchgrove.com, May 08

"An eye-opening alternate history uses over 700 pages of Julian's original writings to provide some eye-opening new revelations on his beliefs."
— The Midwest Book Review, July 2008

"Murdoch, a Roman historian, sees the short reign of Julian as the real end of ancient Rome. His biography of the young emperor is based on Julian's own words, the angry response of Christian writers, and the comments of other pagans."
— Book News, Inc., Aug 2008

"With the current end of the Twentieth Century we are also witnessing the death throes of the most influential religious movements of the last twenty centuries--Christianity and Islam. . . . This end of the Christian Era as some call it, is however, not without its own dangers and precedence. By looking back to the early centuries of the Christian Era, we can in fact, get a better understanding of its origins and what may be awaiting us in the future. . . "
— Institute of Hermetic Studies, Aug 2008

"British historian Adrian Murdoch's The Last Pagan (the phrase comes from the English poet Swinburne) is a thorough-going biography of Julian. In this book, we get a strong sense of the history of the fourth century, which is the age of the decline of the Roman empire made famous by English historian Edward Gibbon, who Murdoch asserts, made Julian the hero of his work."
— Barbara Ardinger, reviewer, Aug 2009

Adrian Murdoch is a historian and journalist. He is the author of Rome’s Greatest Defeat: Massacre in the Teutoburg Forest and The Last Roman, a biography of Romulus Augustulus, the Western Roman Empire’s final emperor. He is a fellow of the Royal Historical Society.
Loading...
or support indie stores by buying on