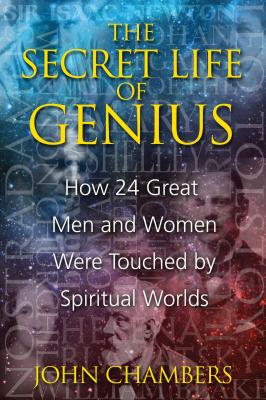 The Secret Life of Genius (Paperback)

How 24 Great Men and Women Were Touched by Spiritual Worlds

• Chronicles the changing relationship with God, nature, and spirituality from the 16th century to the 20th century

What role did the esoteric thought of Swedenborg play in the creative output of Honoré de Balzac? Did a supernatural encounter prompt Mary Wollstonecraft Shelley to focus her work on the theme of immortality? Building on his earlier research on communications with the spirit world that Victor Hugo, author of Les Misérables, experienced while in exile on the isle of Jersey, John Chambers now looks at the role occult knowledge and supernatural experiences played in the lives of 24 geniuses. His investigation spans the life and work of William Blake, Helena Blavatsky, and W. B. Yeats, whose esoteric interests are well known, as well as those little suspected of such encounters with worlds beyond ours, including Doris Lessing, Leo Tolstoy, Norman Mailer, Yukio Mishima, and Winston Churchill.

Chambers presents more than a collection of anecdotes and newly revealed secrets. His research provides insightful historical context of the decisive turning point that took place with the collapse of Prague, the occult capital of Europe, in 1620, which resulted in the victory of Cartesian reality and Newton’s scientific paradigm over the esoteric traditions that flourished until that time. The magical and occult world shown in the lives of these 24 great men and women offers us a glimpse of what could still be ours--a world that though it is now overshadowed by modern scientific and technological principles is yet still visible on the horizon through the visions and paranormal experiences of these geniuses.

John Chambers (1939-2017) had a Master of Arts in English degree from the University of Toronto and spent three years at the University of Paris. He was the author of Victor Hugo’s Conversations with the Spirit World, The Secret Life of Genius, and The Metaphysical World of Isaac Newton. He published numerous articles on subjects ranging from ocean shipping to mall sprawl to alien abduction and contributed essays to Forbidden Religion: Suppressed Heresies of the West.

Praise For The Secret Life of Genius: How 24 Great Men and Women Were Touched by Spiritual Worlds…

“John Chambers has found that the core of human genius has less to do with raw intelligence than we previously assumed. The two dozen extraordinary individuals he examines all share something in common--the application of spiritual experience to life. Chambers thereby unveils the most empowering secret available to every man and woman.”
— Frank Joseph, author of The Lost Civilization of Lemuria and The Destruction of Atlantis

“Rare and penetrating glimpses into the paranormal dimension of 24 famous artists, scientists, and politicians. From Benvenuto Cellini to Winston Churchill and Carl Jung, this book offers fresh perspectives on the achievements of greatness. Written with grace, wit, and quiet erudition--heartily recommended.”
— Michael Grosso, Ph.D., author of Experiencing the Next World Now and The Millennium Myth

"Does genius depend on only raw intelligence, or is there something beyond the mind that infuses it? Read this book and form your own opinion . . . "
— Nexus, Colorado's Holistic Journal, Nov/Dec 2009

"Each of the book's lively accounts starts with a key event from the person's life, moves to significant background experiences, examines other related incidents and outcomes, and often wraps up with a return to the opening segment."
— Richard D. Wright, New Age Retailer, Feb 2010
or
Not Currently Available for Direct Purchase
Copyright © 2020 American Booksellers Association