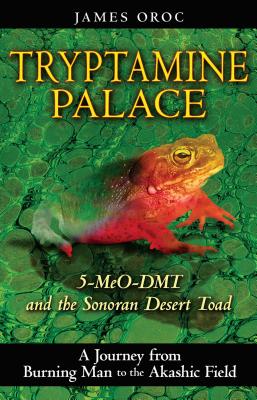 5-MeO-DMT and the Sonoran Desert Toad

The venom from Bufo alvarius, an unusual toad found in the Sonoran desert, contains 5-MeO-DMT, a potent natural chemical similar in effect to the more common entheogen DMT. The venom can be dried into a powder, which some researchers speculate was used ceremonially by Amerindian shamans. When smoked it prompts an instantaneous break with the physical world that causes out-of-body experiences completely removed from the conventional dimensions of reality.

In Tryptamine Palace, James Oroc shares his personal experiences with 5-MeODMT, which led to a complete transformation of his understanding of himself and of the very fabric of reality. Driven to comprehend the transformational properties of this substance, Oroc combined extensive studies of physics and philosophy with the epiphanies he gained from his time at Burning Man. He discovered that ingesting tryptamines unlocked a fundamental human capacity for higher knowledge through direct contact with the zero-point field of modern physics, known to the ancients as the Akashic Field. In the quantum world of nonlocal interactions, the line between the physical and the mental dissolves. 5-MeO-DMT, Oroc argues, can act as a means to awaken the remarkable capacities of the human soul as well as restore experiential mystical spirituality to Western civilization.

Journalist, photographer, and artist James Oroc was born in the small South Pacific nation of Aotearoa. Since 1998 he has been pursuing and reporting on the cutting edge of extreme sports in more than 40 countries around the globe, his work appearing in magazines, films, and on MTV Sports. He has been a member of the Burning Man community since 1999, and he is also involved in the documentation and advancement of “Alternative Culture.” Oroc resides in the Dominican Republic.

Praise For Tryptamine Palace: 5-MeO-DMT and the Sonoran Desert Toad…

“James Oroc writes about wresting spiritual insights from the mind-storms catalyzed by psychedelics, and along the way wrestles with his culture and his role in it. His principal drug ally, 5-MeO-DMT, is not easy to use well, but Oroc emerges grounded and inspired with tales worth sharing.”
— Rick Doblin, founder and president of MAPS (Multidisciplinary Association for Psychedelic Studies)

“With this book, Oroc has proved that the impossible can in fact be put into words. WOW indeed! A must-have for any serious psychonaut on (arguably) the most important subject matter of all time.”
— Dimitri Djanbani, moderator of http://dmt.tribe.net, a DMT discussion group

“If DMT is the ‘Spirit Molecule,’ then 5-MeO-DMT certainly qualifies as the ‘God Molecule’ as illustrated in this highly significant contribution to entheogenic literature. The immediate opening to full God consciousness that 5-MeO-DMT occasions demands careful attention by all those interested in spiritual states of consciousness, entheogenic experience, and the true nature of reality. Oroc’s book is a great beginning to the fascinating exploration that awaits us with 5-MeO-DMT.”
— Martin W. Ball, Ph.D., author of Mushroom Wisdom: How Shamans Cultivate Spiritual Consciousness

“A gripping account of a mind transformed by the powerful psychoactive 5-MeO-DMT struggling to understand its unexpected conversion from atheist to true believer. Oroc fuses hard data and engaging speculations to fire the imagination. Tryptamine Palace is ‘Mr. Toad’s Wild Ride’ for entheogen aficionados, where the firsthand experience of God may be just a toke away.”
— Jon Hanna, mindstates.org

“Tryptamine Palace is destined to be the seminal study of 5-MeODMT, just as The Spirit Molecule personifies DMT and My Problem Child evokes LSD.”
— Andrew Sewell, M.D., LSD cluster-headache researcher

“The Tryptamine Palace is a very informative and engaging book, which aside from eloquently describing his own experiences, manages to provoke many interesting thoughts about psychedelic history (there’s a couple of wonderful sections on Burroughs and Leary), modern society, and the nature of 5-MeO-DMT. I highly recommend this book as one of the finest examples of the psycho-spiritual narrative to have been published in recent years.”
— Psychedelic Press UK, January 2013
or support indie stores by buying on
(This book is on backorder)
Copyright © 2020 American Booksellers Association