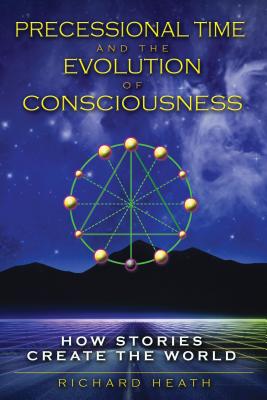 Precessional Time and the Evolution of Consciousness (Paperback)

How Stories Create the World

• Identifies where and how cosmic energies of consciousness and creativity can be found using principles developed by G. I. Gurdjieff and John G. Bennett

All of culture can be said to be made up of stories. In fact it is stories, more than language, tools, or intellect, that make us human. Our Neolithic and Megalithic ancestors recognized this and stored, within their mythic narratives, an understanding of how sky changes evoke changes in consciousness as human cultures progress through each Zodiacal Age of the precessional cycle. As we enter the Age of Aquarius, it is time to recognize the profound power of stories to give our world meaning.

Exploring how ancient myths, megalithic structures, the formation of language, and even prehistoric cave art are narratives shaped by sacred proportion, Richard Heath explains that stories enable us to identify the inner spiritual aspects within our material world and participate in the evolution of human consciousness. He reveals how the precessional myth of the hero’s journey to steal fire from heaven describes a necessary search for new cultural modes that occurs at the end of an Age as the dominant culture begins to falter--and how the massive information bubble created by our modern world, while drowning us in meaningless narratives, also contains the components for an evolutionary shift in consciousness. Presenting key principles advanced by G. I. Gurdjieff and John Bennett to help us awaken to the continuing evolution of our consciousness, Heath shows how to access the spiritual intelligence and heightened creativity available during the galactic alignment of the current “twilight” between two precessional ages.

After decades of technical and spiritual training, Richard Heath became interested in megalithic astronomy and its numerical skillset. He has written five books on the sacred use of numbers. In Matrix of Creation he explores those found in the planetary world, in Sacred Number and the Origins of Civilization he explores those important to ancient civilizations, and in Precessional Time and the Evolution of Consciousness he examines the numbers that define the important Ages of the world. In Sacred Number and the Lords of Time he provides an alternative history for megalithic astronomy, and in The Harmonic Origins of the World, he explains how the megalithic discovered planetary harmony through counting lunar months, thus explaining why ancient texts were informed by harmonic numbers. He lives in the Preseli Hills of West Wales.

Praise For Precessional Time and the Evolution of Consciousness: How Stories Create the World…

“Using precession as a key, Richard Heath has harmonized the revelations of those great originals G. I. Gurdjieff, Alexander Thom, Ernest McClain, and the authors of Hamlet’s Mill. This is the kind of synthesis one has long hoped for and a worthy sequel to Heath’s own cosmological revelation, The Matrix of Creation.”
— Joscelyn Godwin, author of Atlantis and the Cycles of Time

“All mythology is rooted in the relationship between Earth, Moon, Sun, and Stars, and these stories are at the very core of human experience. In this book Richard Heath draws these ideas together to create a vivid and inspiring narrative that reconnects us with our true origins and future potential.”
— Paul Broadhurst, coauthor of The Sun and the Serpent

“Readers will benefit from a good grasp of math and astronomy, or an in-depth knowledge of constellational astrology and galactic structure. Health supports the theory that the shifting ages have an influence on the development of human civilization . . . ”
— Elizabeth Hazel, FacingNorth.net, September 2011
or support indie stores by buying on
Copyright © 2020 American Booksellers Association