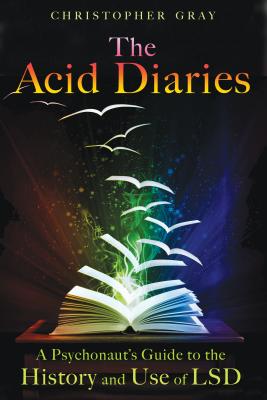 A Psychonaut’s Guide to the History and Use of LSD

An exploration of the personal and spiritual truths revealed through LSD

• Shows that trips progress through three stages: personal issues and pre-birth consciousness, ego-loss, and on to the sacred

• Explores psychedelic use throughout history, including the mass hallucinations common in the Middle Ages and the early therapeutic use of LSD

Toward the end of his fifties, Christopher Gray took, for the first time in years, a 100-microgram acid trip. So extraordinary, and to his surprise so enjoyable, were the effects that he began to take the same dose in the same way--quietly and on his own--once every two to three weeks.

In The Acid Diaries, Gray details his experimentation with LSD over a period of three years and shares the startling realization that his visions were weaving an ongoing story from trip to trip, revealing an underlying reality of personal and spiritual truths. Following the theories of Stanislav Grof and offering quotes from others’ experiences that parallel his own--including those of Aldous Huxley, Albert Hofmann, and Gordon Wasson--he shows that trips progress through three stages: the first dealing with personal issues and pre-birth consciousness; the second with ego-loss, often with supernatural overtones; and the third with sacred, spiritual, and even apocalyptic themes. Pairing his experiences with an exploration of psychedelic use throughout history, including the ergot-spawned mass hallucinations that were common through the Middle Ages and the early use of LSD for therapeutic purposes, Gray offers readers a greater understanding and appreciation for the potential value of LSD not merely for transpersonal growth but also for spiritual development.

Praise For The Acid Diaries: A Psychonaut’s Guide to the History and Use of LSD…

"Truly The Acid Diaries is a return to form for psychedelic literature, not only is it a beautifully written narrative but it's full of engaging ideas that Gray uses to weave a web of possibility and, ultimately, hope for the future of psychedelics."
— Psychedelic Press, UK, August 2010

“For anyone who thinks the story of LSD was written in the sixties: think again. The Acid Diaries combines a sharp critique of that decade’s psychedelic adventures with a brave and original series of self-experiments in the present day. The result is an instant classic of acid literature.”
— Mike Jay, author of Artificial Paradises and High Society

“A unique account of a courageous psychonaut’s journey into the preternatural depths of human consciousness.”
— Martin A. Lee, coauthor of Acid Dreams

“The Acid Diaries is the best insider’s portrait of the psychedelic journey I’ve ever found; the writing is stunningly beautiful in its effervescent candor. The Acid Diaries is an exceptionally honest and unguarded book.”
— Dr. Christopher M. Bache, author of Lifecyles, Dark Night/Early Dawn, and The Living Classroom

“Instant enlightenment? Hardly. One has to work for it, as outlined in this book . . . highly recommended . . .”
— Jonathan Ott, ethnobotanist, writer, translator, publisher, natural products chemist, and botanical

“Like any strong acid trip, there is both existential angst and cosmic bliss, and many states in between. The Acid Diaries is a contemporary classic of personal psychedelic exploration.”
— Michael Horowitz, Tim Leary’s autobiographer

“All psychonauts will admire and profit from this amazing gift.”
— John Allen, chairman of Global Ecotechnics and inventor of the Biosphere 2 Project

“If you have any interest at all in acid, then get your hands on this book!”
— Stewart Home, artist, academic, filmmaker, activist, and author

“It is Gray’s foundation in spiritual practices that makes The Acid Diaries glow. . . Gray is not some detached scientist. Nor is he some drugged our hippie. He writes with an intelligent, literate and confessional voice that’s casual, yet never sloppy. . . This makes The Acid Diaries an excellent “gateway” book into the genre of psychedelic literature for anyone new to the field.”
— Gene Ching, Journal of Psychoactive Drugs (Volume 42 (4), December 2010

Christopher Gray (1942-2009) was well known for his involvement in the 1960s with Situationist International, for his various radical writings, and as Swami Prem Paritosh, disciple of the guru Osho. He translated Raoul Vaneigem’s Banalités de Base (as The Totality for Kids) and is the author of Leaving the Twentieth Century, the first English language anthology of Situationist ideas, and the biography Life of Osho.
or
Not Currently Available for Direct Purchase