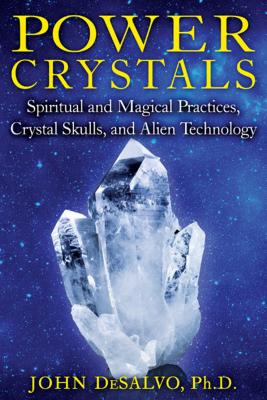 An exploration of the scientific, historical, and paranormal qualities of quartz crystals and ancient crystal skulls

• Explores the use of crystals throughout history, including their role in Atlantis and in alien technology

• Offers step-by-step instructions to successfully use crystals in scrying, meditation, and Enochian magic

Known for his in-depth scientific work on the Shroud of Turin and the Great Pyramid of Giza, John DeSalvo, Ph.D., now sets his sights on quartz crystals and their mystical counterpart, crystal skulls. Exploring the use of crystals from Mesopotamia and ancient Egypt to present-day technology, including their use in ritual and ceremonial magic and their importance in ancient religious literature, he examines the many physical and chemical properties of quartz crystals and explains how their crystalline lattice structure is the key to their amazing abilities, both scientific and paranormal. Reviewing the many paranormal claims about crystal skulls, DeSalvo reveals the scientific findings on his own ancient crystal skull as well as research by the British Museum on other famous crystal skulls. His investigation also extends to the recent discovery in Tibet of a trove of Dropa discs--grooved stones allegedly recording an ancient alien visit to Earth.

Highlighting the use of quartz crystals and crystal skulls for psychic and spiritual purposes, DeSalvo offers step-by-step instructions for their use in scrying, meditation, and Enochian magic, including communication with angels. Reviewing accounts of power crystals in Atlantis and their use in alien technology, he explains how crystals connect the physical world with the spiritual via a powerful communication network linking all crystals and their memories--the Space-Time Crystal Matrix, a spiritual technology lost to the ages but which may become the communication system of the future.

“This incredible book may well be DeSalvo’s greatest work as he unravels the mystery behind the incredible power of quartz crystals as well as ancient crystal skulls. This book should not be missed!”
— Joyce Keller, host of the Joyce Keller Show and author of Calling All Angels

“An original and creative contribution to the world of crystals. DeSalvo reveals the magic and power behind quartz crystals and crystal skulls. His practical instructions for using crystals to communicate with angels are invaluable. I recommend this book as a down-to-earth guide to using the energy of the crystals to support the connection of the physical and spiritual worlds.”
— Sunny Dawn Johnston, author of Invoking the Archangels

“Power Crystals: Spiritual and Magical Practices, Crystal Skulls, and Alien Technology at merely a touch over 200 pages (and that’s including the index!) is an amazingly in depth resource for everything quartz crystal. Upon finishing it, I immediately wanted to start reading certain sections (cough, ahem, crystal skulls, cough, cough) again. It’s a fascinating and entertaining ride designed for both the new age spiritualist and the skeptic.”
— Magical Buffet, August 2012

“This book is an excellent, balanced introduction to a wide variety of crystals, and their physical and metaphysical properties. The author has interviewed authorities who have had much experience with a variety of crystals, and who share thoughtful, unique first–hand information about their experiences...The emphasis is on presenting a variety of approaches, many photographs and color plates, footnotes, and a bibliography are included. This book is an excellent foundation in learning about quartz crystals because the author has remained grounded in what is verifiable at the same time he presents a variety of practical material that is diverse and interesting.”
— Deena, House of Seshat, August 2012

“Power Crystals takes the reader on a fantastic crystal journey, beyond the boundaries of most current books on stone lore. If the author’s speculations come true, it will be a most interesting future.”
— Robert Simmons, Tucson Metaguide, September 2012

“Dr. John DeSalvo’s latest book—Power Crystals—is a quantum leap! DeSalvos main hypothesis—The Space-Time Crystal Matrix—is an important scientific contribution in crystal research. John brilliantly integrates quantum physics, string theory, and the use of quartz for communication...John DeSalvo’s discovery of The Space-Time Crystal Matrix is the information we need now in order to recover the lost knowledge of the global maritime civilization—humans that lived in harmony with Nature and enjoyed multi-dimensional communication. We can’t drag our feet for a hundred years as we did after the quantum was discovered. We must access multi-dimensional consciousness right now so that we can find our way back to resonance with Nature.”
— Barbara Hand Clow, author of Alchemy of Nine Dimensions and Awakening the Planetary Mind

“Anyone interested in this highly specialized field of research and speculation may find this book a worthwhile addition to the plethora of works on the subject.”
— Frater U.I.F., Behutet Magazine, October 2012

“Power Crystals provides a convincing argument for the existence of this Space-Time Crystal Matrix. There is certainly a degree of crystal involvement in the fabric of an expanded reality, and this book richly details this interwoven matrix.”
— Marc Star, New Dawn, December 2012

“Based on research and scientific testing, Power Crystals is a definitive resource on crystals.”
— Jelina Vance, New Connexions, March 2013

“Power Crystals is a well written, well researched and simply all around good book about quartz crystals. It is written from the viewpoint of a scientist who does believe in some mysticism. John DeSalvo, Ph.D. gives us a very good and detailed overview of quartz crystals, from their elemental makeup to where they can be found to several theories as to why they are so frequently used in spiritual practices, divination and energy healing...For anyone interested in crystals, I highly recommend this book.”
— Jessica Elizabeth, Facing North, May 2013

“The leading sourcebook on the subject. . . . John DeSalvo’s synthesis of psychic intuition tempered by hard science makes for the most enlightening examination of crystals and their energetic relevance.”
— Frank Joseph, author of Atlantis and 2012 and Advanced Civilizations of Prehistoric America

John DeSalvo holds a Ph.D. in biophysics and, for more than 30 years, scientifically studied the Shroud of Turin. A former college professor and current director of the Great Pyramid of Giza Research Association, he is the author of many books, including The Lost Art of Enochian Magic, Andrew Jackson Davis: The First American Prophet and Clairvoyant and Decoding the Pyramids. He is a frequent guest on Coast to Coast AM radio and other shows. He lives in Plymouth, Minnesota.
Loading...
or support indie stores by buying on