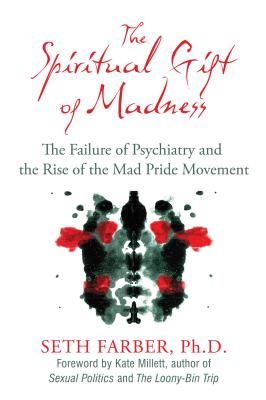 The Spiritual Gift of Madness

• Explains how many of those diagnosed as schizophrenic, bipolar, and other forms of “madness” are not ill but experiencing a spiritual awakening

Many of the great prophets of the past experienced madness--a breakdown followed by a breakthrough, spiritual death followed by rebirth. With the advent of modern psychiatry, the budding prophets of today are captured and transformed into chronic mental patients before they can flower into the visionaries and mystics they were intended to become. As we approach the tipping point between extinction and global spiritual awakening, there is a deep need for these prophets to embrace their spiritual gifts. To make this happen, we must learn to respect the sanctity of madness. We need to cultivate Mad Pride.

Exploring the rise of Mad Pride and the mental patients’ liberation movement as well as building upon psychiatrist R. D. Laing’s revolutionary theories, Seth Farber, Ph.D., explains that diagnosing people as mad has more to do with social control than therapy. Many of those labeled as schizophrenic, bipolar, and other kinds of “mad” are not ill but simply experiencing different forms of spiritual awakening: they are seeing and feeling what is wrong with society and what needs to be done to change it. Farber shares his interviews with former schizophrenics who now lead successful and inspiring lives. He shows that it is impossible for society to change as long as the mad are suppressed because they are our catalysts of social change. By reclaiming their rightful role as prophets of spiritual and cultural revitalization, the mad--by seeding new visions for our future--can help humanity overcome the spiritual crisis that endangers our survival and lead us to a higher and long-awaited stage of spiritual development.

Praise For The Spiritual Gift of Madness: The Failure of Psychiatry and the Rise of the Mad Pride Movement…

“By reclaiming their rightful role as prophets of spiritual and cultural revitalization, the mad--by seeding new visions for our future--can help humanity overcome the spiritual crisis that endangers our survival and lead us to a higher and long-awaited stage of spiritual development.”
— Earth Star Magazine, June 2012

“The book will appeal to devotees of spirituality and/or metaphysics.”
— Linda F. Petty, Library Journal, July 2012

“This book rightly points out the need to reevaluate our classifications of madness and open the door to the sometimes visionary rantings of our fellow citizens.”
— Lotus Guide, July 2012

“A fine pick for any mental health collection seeking different perspectives on the idea of insanity and its treatment.”
— Midwest Book Review, July 2012

“Seth Farber is one of the most provocative and original thinkers in America. He brings us to the threshold of the only questions that really matter: the demarcation lines between imagination and objective reality and between ‘madness’ and ‘sanity’. The Spiritual Gift of Madness is an important book that could revolutionize the way progressive religious people regard what is called mental health. ”
— Frank Schaeffer, author of Crazy for God: How I Grew Up as One of the Elect, Helped Found the Religi

“Farber critically considers the role of madness in culture and sees it as a positive force for change rather than a disease needing treatment. At the same time he does not play down the difficulties encountered by those experiencing such ‘initiations,’ but believes we need to cherish them and appreciate their visionary role in a world gone insane.”
— Robert Black, New Dawn, January 2013

Seth Farber, Ph.D., is a psychologist, public speaker, and a founder of the Network against Coercive Psychiatry. The author of several books, including Unholy Madness, and an editor of The Journal of Mind and Behavior, he lives in New York City.

Kate Millett is the author of Sexual Politics and The Loony-Bin Trip.
Loading...
or support indie stores by buying on