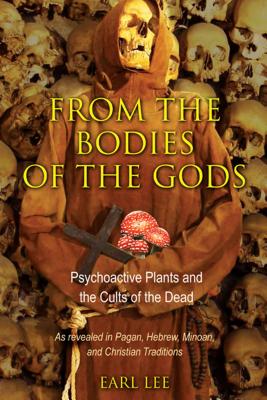 From the Bodies of the Gods

Psychoactive Plants and the Cults of the Dead

The origins of modern religion in human sacrifice, ritual cannibalism, visionary intoxication, and the Cult of the Dead

• Explains how these practices are deeply embedded in the symbolism, theology, and sacraments of modern religion, specifically Christianity and the Eucharist

• Documents the rites of Cults of the Dead from the prehistoric Minoans on Crete to the ancient Egyptians, Greeks, and Hebrews to early and medieval Christian sects such as the Cathars

Long before the beginnings of civilization, humans have been sacrificed and their flesh used to produce sacred foods and oils for use in religious rites. Originating with the sacred harvest of hallucinogenic mushrooms from the corpses of shamans and other holy men, these acts of ritual cannibalism and visionary intoxication are part of the history of all cultures, including Judeo-Christian ones, and provided a way to commune with the dead. These practices continued openly into the Dark Ages, when they were suppressed and adapted into the worship of saintly bones--or continued in secret by a few “heretical” sects, such as the Cathars and the Knights Templar. While little known today, these rites remain deeply embedded in the symbolism, theology, and sacraments of modern religion and bring a much more literal meaning to the church’s “Holy Communion” or symbolic consumption of the body and blood of Christ.

Documenting the sacrificial, cannibalistic, and psychoactive sacramental practices associated with the Cult of the Dead from the prehistoric Minoans on Crete to the ancient Egyptians and Hebrews and onward to early and medieval Christian sects, Earl Lee shows how these religious rites influenced the development of Western religion. In particular, he reveals how Christianity originated with Jesus’s effort to restore the sacred rites of Moses, including the Marzeah, or Feast for the Dead. Examining the connections between these rites and the mysterious funeral of Father Sauniere in Rennes-le-Château, the author explains why the prehistoric Cult of the Dead has held such power over Western civilization, so much so that its echoes are still heard today in our literature, film, and arts.

Praise For From the Bodies of the Gods: Psychoactive Plants and the Cults of the Dead…

“From time to time, a book comes along that stops you in your tracks and stuns your mind. From the Bodies of the Gods is such a book. It will—and should—provoke intense discussion about some of the most fundamental underpinnings of Western religions.”
— Larry Dossey, M.D., author of Healing Words, Reinventing Medicine, and The Power of Premonitions

“An insightful analysis on early funeral rites and ethnomycology . . . deepens our body of learning about the origins of the Christian faith and humanity’s entheogenic history.”
— Rob Dickins, editor of the Psychedelic Press UK

“These were ideas intensely debated by seminarians after the disclosures of the Dead Sea Scrolls. . . . As this book demonstrates, many passages in the Holy Scriptures are incomprehensible as anything but blatant descriptions of the Christian cult of the dead traceable back to the earliest religious rites of prehistory and prevalent throughout antiquity and medieval Catholicism.”
— Carl A. P. Ruck, professor of Classical Studies, Boston University, and author of Mushrooms, Myths,

“After this learned exploration of how necrophilia, hallucinogens, body fluids, human sacrifice, and ancestor worship powerfully influenced the major religions like Judaism and Christianity, it will be hard to view those venerable faiths and institutions in the standard, conventional way. During his stunning intellectual romp, Lee also provides fascinating, even ‘heretical,’ insights into such personages, places, and practices as the Roman catacombs, Last Supper, Eucharist; Neolithic, Hebrew, Greek, and Egyptian burial rites; Horus, the Virgin Mary, Moses, Jesus, the Knights Templar, veneration of saintly relics and the Holy Grail, Minoan mead-making, Dominicans, corpse-painting, psychedelic mushroom-growing, anointing, witch-hunting, Prometheus, and goddess worship.”
— Sanford Berman, award-winning librarian and author of Prejudices and Antipathies

“...the book is a trove to delve into and it’ll be interesting to see what further scholarship it gives rise too.”
— Psychedelic Press UK, July 2012

Earl Lee is a professor at Pittsburg State University and the author of several books, including Raptured, Drakulya, and Libraries in the Age of Mediocrity. He lives in Pittsburg, Kansas.
Loading...
or
Not Currently Available for Direct Purchase