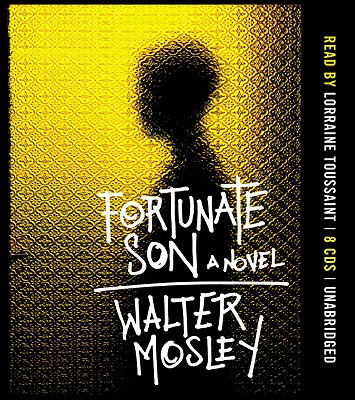 In spite of remarkable differences, Eric and Tommy are as close as brothers. Eric, a Nordic Adonis, is graced by a seemingly endless supply of good fortune. Tommy is a lame black boy, cursed with health problems, yet he remains optimistic and strong.After tragedy rips their makeshift family apart, the lives of these boys diverge astonishingly: Eric, the golden youth, is given everything but trusts nothing; Tommy, motherless and impoverished, has nothing, but feels lucky every day of his life.

In a riveting story of modern-day resilience and redemption, the two confront separate challenges, and when circumstances reunite them years later, they draw on their extraordinary natures to confront a common enemy and, ultimately, save their lives.

Welcome one more of Mosley's departures from mystery fiction. FORTUNATE SON is a compassionate, lyrical, and heartbreaking story of the parallel lives of two "brothers." Lorraine Toussaint brilliantly follows the two boys: Tommy, unhealthy and plagued by the harshest of life's realities, and golden boy Eric, a privileged doctor's son. The melodrama is occasionally inflated, edging to improbable, and could be over the top in the hands of a less gifted narrator. Toussaint's thoughtful yet precise handling of the characters and relationships deeply touches the listener. She never misses the opportunity to color an unusual character, making the most of Mosley's people. The boys' lives are interwoven with tragedy and loyalty, and Toussaint is a sensitive and intuitive narrator delivering a velvety punch. R.F.W. Winner of AudioFile Earphones Award, 2007 Audies Award Finalist © AudioFile 2006, Portland, Maine [Published: AUG/ SEP 06]
—-