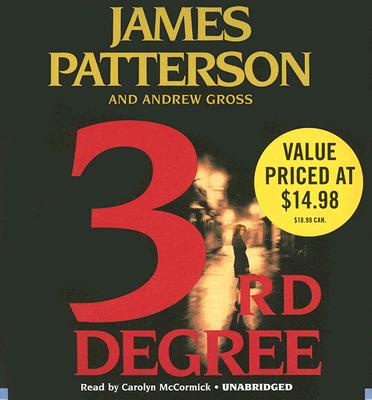 The #1 bestselling new mystery series of the past decade comes roaring back with 3rd Degree, a shockingly suspenseful thriller featuring the Women's Murder Club. One of James Patterson's best loved heroines is about to die. Detective Lindsay Boxer is jogging along a beautiful San Francisco street when a fiery explosion rips through the neighborhood. A town house owned by an Internet millionaire is immediately engulfed in flames, and when Lindsay plunges inside to search for survivors, she finds three people dead. An infant who lived in the house cannot be found - and a mysterious message at the scene leaves Lindsay and the San Francisco Police Department completely baffled. Then a prominent businessman is found murdered under bizarre circumstances, with another mysterious message left behind by the killer. Lindsay asks her friends Claire Washburn of the medical examiner's office, Assistant D.A. Jill Bernhardt, and Chronicle reporter Cindy Thomas to help her figure out who is committing these murders-and why they are intent on killing someone every three days. Even more terrifying, the killer has targeted one of the four friends who call themselves the Women's Murder Club. Which one will it be? While the investigation rages furiously, Lindsay works very closely with a federal officer assigned to the case. At the same time, she learns that one member of the Women's Murder Club is hiding a secret so dangerous and unbelievable that it could destroy them all.