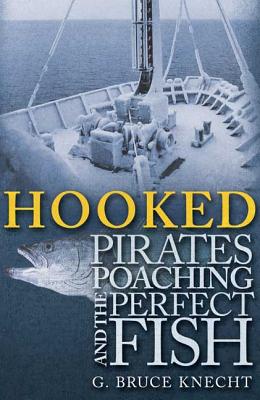 Pirates, Poaching, and the Perfect Fish

This modern pirate yarn has all the makings of a great true adventure tale and is also an exploration of the ways our culinary tastes have all manner of unintended consequences for the world around us.

Hooked is a story about the poaching of the Patagonian toothfish (known to gourmands as Chilean Sea Bass) and is built around the pursuit of the illegal fishing vessel Viarsa by an Australian patrol boat, Southern Supporter, in one of the longest pursuits in maritime history.

Author G. Bruce Knecht chronicles how an obscure fish merchant in California "discovered" and renamed the fish, kicking off a worldwide craze for a fish no one had ever heard of - and everyone had to have. And with demand exploding, priates were only too happy to satisfy our taste for Chilean Sea Bass.

Knecht - whose previous book The Proving Ground was hailed by Walter Cronkite as "a sailing masterpiece...a tale more thrilling than fiction"—captivates readers by deftly shifting among the story's nail-biting elements: The perilous chase at sea through frenzied winds, punishing waves, and an obstacle course of icebergs; the high-stakes environmental battle and courtroom drama; and the competitive battle among the world's restaurants to serve the perfect, flaky, white-fleshed fish.

From the world's most treacherous waters to its most fabulous kitchens, Hooked is at once a thrilling tale and a revelatory popular history that will appeal to a diverse group of readers. Think Kitchen Confidential meets The Hungry Ocean.

Praise For Hooked: Pirates, Poaching, and the Perfect Fish…

“Hooked is a fish story, a global whodunit, a courtroom drama--and a critically important ecological message all rolled into one.” —Tom Brokaw

“A high-seas adventure with enough action and suspense to have you holding your breath.

A mystery that untangles the roots of a culinary fad fitfully hatched in and marketed from Los Angeles.
A courtroom thriller.

Proof positive that an objective eye is the most persuasive of all.
Mr. G. Bruce Knecht, take a bow.

Not only is "Hooked: Pirates, Poaching and the Perfect Fish" a rollicking read, it is a relief. And a wonder. For wrapped up in these red-blooded storytelling ingredients is the account of another assault on our planet's troubled environment. And let's face it, conservation writing has become one of our dreariest forms: The sky is falling, oh dear ... fill in the blanks.

In these taut pages, Knecht takes livelier aim at the plundering of a limited resource for the sake of growing appetites. He delivers us, straight ahead and close-in, to an epic sea chase across the fearsome Southern Ocean. In one boat, righteous men are out to get what they want, what they regard as theirs, in this seascape of ice and storm. In the other, righteous men are out to stop them in the name of the law.

The story about the demise of the Patagonian toothfish, an ugly, tasteless creature with an unappealing name, is not so heartening. But the fact that Knecht tells it with such crackling drive and with complete confidence in the good judgment of his readers is.

The Patagonian toothfish is large, dark-skinned and cod-like in appearance. The name comes from its undershot mouth and needle-sharp fangs. It dwells in deep, cold waters - for purposes of Knecht's story, in the waters of the far Southern Hemisphere. Back in the late 1970s, it was a trash fish caught only incidentally by the commercial fleet that worked out of Valparaíso, Chile. It was thought too oily to be desirable.

But a decline in the catch of other more salable fish, along with some desperate determination by global fish brokers who work the Chile-to-Los Angeles circuit, a dash of ingenuity by seafood marketers and a splash of savory miso glaze in a fancy New York restaurant, and voilà, you have the highly desirable, evermore expensive and, of course, deliciously trendy Chilean sea bass.

You can guess what this newfound glamour has meant for the toothfish. Late in the game, as usual, fishery experts have weighed in with the news that this long-lived, slow-growing animal cannot endure the strip-mining of modern commercial fishing. By now, though, the fish has become the rage, commanding exorbitant prices; for fisherman, this is irresistible. Although their reach and budgets are limited, governments have made efforts to "save" the toothfish, joined in the effort by environmental activists and, here and there, responsible chefs too.

But enough. I said that Knecht had confidence in his readers. This book contains no sermon. All the essential elements are there, yes. But if someone is going to take to the soapbox and wag a stern finger, it will have to be you.

Tearing through this page turner is enough to trigger a pinch-me sensation. Wait a minute, am I reading a book about exploitation of our fragile planet in which the writer isn't bashing me over the head with the obvious? Am I learning about the sensibilities of those who fish where they please along with the struggles of those who try to stop them? Am I getting both a story and the story?

We can wish Knecht good fortune in the hope that others will follow his cue. True enough, not all conservation issues yield the plot and rugged characters of a Jack London high-seas adventure. And it's plain that the most pressing conservation stories, like global warming, don't arrive at easy answers.

But there is something to the notion of casting one's net wider than the didactic, and Knecht proves it. Conservationists will be with him, and who knows who else he will reel in for the sake of an oh-my-goodness tale.

A reporter for the Wall Street Journal as well as an experienced sailor, Knecht's last book was the harrowing adventure "The Proving Ground," the story of the tragic Sydney-to-Hobart yacht race in 1998, in which a surprise storm took out more than half the fleet and killed six mariners. His feel for the wild wonder of the sea goes without saying.

But what about the courtroom thriller part of this book?

We'll leave that to the author and his compelling narrative. The outlines of the story have the Australian patrol boat Southern Supporter in territorial waters north of Antarctica, prime habitat for the shrinking population of Patagonian toothfish. The under-gunned patrol encounters a shadowy 175-foot, Uruguayan-flagged ship, the Viarsa-1. Fishing pirates? Probably.

Before the tale is over, these ships have traversed 4,000 miles of some of the most inhospitable and terrifying waters on the planet, and two years have lapsed. Australia, which is not alone among nations with an imperfect record of managing fisheries, has its laws tested by the tradition of lawlessness that has long ruled the high seas.

All the while, by the heavy ton, by the container load, by the merciless rule of supply and demand, Patagonian toothfish are drawn from the deep, grilled, poached, broiled and sauced in another maritime gold rush.

Then a jury speaks.

It gives away nothing to say that when you next find yourself at a restaurant looking at the seafood offerings, you'll know what you should do.

“In 1977 Lee Lantz, a Los Angeles fish wholesaler, came across something new in the Chilean fishing port of Valparaiso. The enormous "fearsome- looking gray-black fish" was called "bacalao de profundidad," or "cod of the deep," by the local fisherman, and nobody wanted it. In "Hooked," G. Bruce Knecht, a writer for The Wall Street Journal, tells how the fish nobody wanted became the trendy Chilean sea bass, and how over the last 30 years it has been fished almost to the point of extinction. In chapters that move from places like the South Indian Ocean to Bridgehampton, N.Y., to Vancouver to Perth, Australia, Mr. Knecht tells of the rise and fall of a fish, as well as of a 4,000-mile chase to seize a pirate fishing boat. ” —The New York Times

G. BRUCE KNECHT is a New York-based writer for The Wall Street Journal. His work has also been published in the Atlantic Monthly and the New York Times Magazine.
Loading...
or
Not Currently Available for Direct Purchase