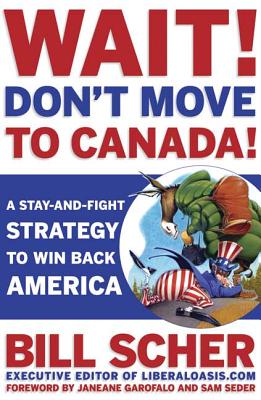 A Stay-and-Fight Strategy to Win Back America

Frustrated liberals are mired in the political wilderness, while disgruntled Democrats and Republicans have grown weary of unprincipled politics, shoddy governance, and the general ineptitude of our public servants. "Look, it would be a lot easier to cut and run to Canada," say Janeane and Sam in their foreword, "but we all have an obligation not to." To those willing to stay and fight, Bill Scher offers a 10-step plan to rally popular support for a better, more effective, more liberal vision of government.

To achieve this vision, Scher arms his readers with an arsenal of attitude and practical, actionable advice on how to:

Scher, whose Web log LiberalOasis.com is one of the go-to political sites in the rapidly expanding--and increasingly influential--blogosphere, articulates his strategies in a straightforward, vibrant, and accessible style that explodes the stereotypes of the liberal wimp or egghead.

Bill Scher, founder and executive editor of Liberal Oasis.com, appears Mondays on Air America Radio's The Majority Report. His commentary has been printed in the Minneapolis Star Tribune and the Philadelphia Inquirer, and he has made several appearances on MSNBC. LiberalOasis.com has been featured in many publications, including the New York Times, USA Today, and the Chicago Tribune. Scher lives in Northampton, Massachusetts.
Loading...
or
Not Currently Available for Direct Purchase