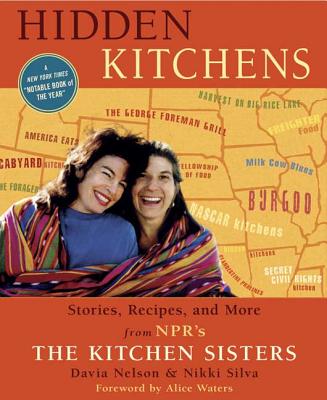 Stories, Recipes, and More from NPR's The Kitchen Sisters

Inspired by the popular, award winning radio series on NPR's Morning Edition, Hidden Kitchens explores the world of secret, unexpected, below-the-radar community cooking across America: a midnight cab yard kitchen on the streets of San Francisco, a secret civil rights kitchen tucked away in a house in Montgomery, freighter food from the galleys of the Great Lakes, the most unexpected hidden kitchen of the homeless—the George Foreman grill. The Kitchen Sisters travel the nation in search of unsung kitchen heros, legendary meals, and cooking rituals in this wild, poignant chronicle of American life through food.

Praise For Hidden Kitchens: Stories, Recipes, and More from NPR's The Kitchen Sisters…

“The genius of the Kitchen Sisters has been to discover a nation filled with humor, imagination, and passion.” —Alice Waters, from the Foreword

“Silva and Nelson catalog and spin yarns about offbeat kitchens of all sorts, from the racing pits of NASCAR to Vietnamese ones in nail salons to those smoking in midnight cab yards. Their stories, highlighted with photos, always grab you.” —The New York Times

“The Kitchen Sisters are my favorite storytellers. Their offbeat and heartfelt kitchen stories make me want to walk through my neighborhood, go on a road trip, and eat the food of family.” —Francis Ford Coppola

“The Kitchen Sisters have done some of the best radio stories ever broadcast.” —Ira Glass, host and producer of This American Life

The Kitchen Sisters (NIKKI SILVA AND DAVIA NELSON) have been producing radio programs together since 1979. They are the creators, with Jay Allison, of two Peabody Award winning NPR series, Lost & Found Sound and The Sonic Memorial Project, heard on All Things Considered. Their ongoing Hidden Kitchens radio series on Morning Edition has received a DuPont-Columbia Award and a James Beard award nomination. They teach at the University of California Berkeley Graduate School of Journalism and lecture and provide training workshops around the country. In addition to producing radio, Davia Nelson is also a screenwriter and casting director. She lives in San Francisco. Nikki Silva is also a museum curator and exhibit consultant. She lives with her family in a commune in Santa Cruz, California.
Loading...
or
Not Currently Available for Direct Purchase