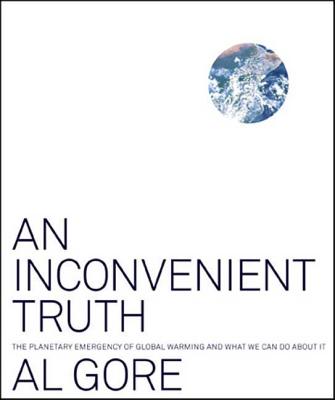 An Inconvenient Truth—Gore's groundbreaking, battle cry of a follow-up to the bestselling Earth in the Balance—is being published to tie in with a documentary film of the same name. Both the book and film were inspired by a series of multimedia presentations on global warming that Gore created and delivers to groups around the world. With this book, Gore, who is one of our environmental heroes—and a leading expert—brings together leading-edge research from top scientists around the world; photographs, charts, and other illustrations; and personal anecdotes and observations to document the fast pace and wide scope of global warming. He presents, with alarming clarity and conclusiveness—and with humor, too—that the fact of global warming is not in question and that its consequences for the world we live in will be disastrous if left unchecked. This riveting new book—written in an accessible, entertaining style—will open the eyes of even the most skeptical.

Praise For An Inconvenient Truth: The Planetary Emergency of Global Warming and What We Can Do About It…

“New York Times - May 23, 2006
Books of The Times | 'An Inconvenient Truth'
Al Gore Revisits Global Warming, With Passionate Warnings and Pictures
By MICHIKO KAKUTANI
Lately, global warming seems to be tiptoeing toward a tipping point in the public consciousness. There has been broad agreement over the fundamentals of global warming in mainstream scientific circles for some time now. And despite efforts by the Bush administration to shrug it off as an incremental threat best dealt with through voluntary emissions controls and technological innovation, the issue has been making inroads in the collective imagination, spurred by new scientific reports pointing to rising temperatures around the world and melting ice fields in Greenland and Antarctica. A year ago, the National Academy of Sciences joined similar groups from other countries in calling for prompt action to reduce greenhouse gas emissions.

A Time magazine cover story in April declared that "the climate is crashing and global warming is to blame," noting that a new Time/ABC News/Stanford University poll showed that 87 percent of respondents believe the government should encourage or require a lowering of power-plant emissions. That same month, a U.S. News & World Report article noted that dozens of evangelical leaders had called for federal legislation to reduce carbon dioxide emissions, and that "a growing number of investors are pushing for change from the business community" as well. And even Hollywood movies like the kiddie cartoon "Ice Age: The Meltdown" and the much sillier disaster epic "The Day After Tomorrow" take climate change as a narrative premise.

Enter "or rather, re-enter" Al Gore, former vice president, former Democratic candidate for president and longtime champion of the environment, who helped to organize the first Congressional hearings on global warming several decades ago.

Fourteen years ago, during the 1992 campaign, the current president's father, George Herbert Walker Bush, dismissed Mr. Gore as "Ozone Man" -- if the Clinton-Gore ticket were elected, he suggested, "we'll be up to our neck in owls and out of work for every American" -- but with the emerging consensus on global warming today, Mr. Gore's passionate warnings about climate change seem increasingly prescient. He has revived the slide presentation about global warming that he first began giving in 1990 and taken that slide show on the road, and he has now turned that presentation into a book and a documentary film, both called "An Inconvenient Truth." The movie (which opens in New York and Los Angeles on Wednesday) shows a focused and accessible Gore "a funnier, more relaxed and sympathetic character" than he was as a candidate, said The Observer, the British newspaper " and has revived talk in some circles of another possible Gore run for the White House.

As for the book, its roots as a slide show are very much in evidence. It does not pretend to grapple with climate change with the sort of minute detail and analysis displayed by three books on the subject that came out earlier this spring ("The Winds of Change" by Eugene Linden, "The Weather Makers" by Tim Flannery and "Field Notes From a Catastrophe" by Elizabeth Kolbert), and yet as a user-friendly introduction to global warming and a succinct summary of many of the central arguments laid out in those other volumes, "An Inconvenient Truth" is lucid, harrowing and bluntly effective.

Like Mr. Gore's 1992 book "Earth in the Balance," this volume displays an earnest, teacherly tone, but it's largely free of the New Age psychobabble and A-student grandiosity that rumbled through that earlier book. The author's wonky fascination with policy minutiae has been tamed in these pages, and his love of charts and graphs has been put to good use. Whereas the charts in "Earth in the Balance" tended to make the reader's eyes glaze over, the ones here clearly illustrate the human-caused rise in carbon dioxide levels in recent years, the simultaneous rise in Northern Hemisphere temperatures and the correlation between the two. Mr. Gore points out that 20 of the 21 hottest years measured "have occurred within the last 25 years," adding that the hottest year yet was 2005" a year in which "more than 200 cities and towns" in the Western United States set all-time heat records.

As for the volume's copious photos, they too serve to underscore important points. We see Mount Kilimanjaro in the process of losing its famous snows over three and a half decades, and Glacier National Park its glaciers in a similar period of time. There are satellite images of an ice shelf in Antarctica (previously thought to be stable for another 100 years) breaking up within the astonishing period of 35 days, and photos that show a healthy, Kodachrome-bright coral reef, juxtaposed with photos of a dying coral reef that has been bleached by hotter ocean waters.

Pausing now and then to offer personal asides, Mr. Gore methodically lays out the probable consequences of rising temperatures: powerful and more destructive hurricanes fueled by warmer ocean waters (2005, the year of Katrina, was not just a record year for hurricanes but also saw unusual flooding in places like Europe and China); increased soil moisture evaporation, which means drier land, less productive agriculture and more fires; and melting ice sheets in Antarctica and Greenland, which would lead to rising ocean levels, which in turn would endanger low-lying regions of the world from southern Florida to large portions of the Netherlands.

Mr. Gore does a cogent job of explaining how global warming can disrupt delicate ecological balances, resulting in the spread of pests (like the pine beetle, whose migration used to be slowed by colder winters), increases in the range of disease vectors (including mosquitoes, ticks and fleas), and the extinction of a growing number of species.

Already, he claims, a study shows that "polar bears have been drowning in significant numbers" as melting Arctic ice forces them to swim longer and longer distances, while other studies indicate that the population of Emperor penguins "has declined by an estimated 70 percent over the past 50 years."

The book contains some oversimplifications. While Mr. Gore observes that the United States is currently responsible for more greenhouse gas pollution than South America, Africa, the Middle East, Australia, Japan and Asia combined, he underplays the daunting increase in emissions that a rapidly growing China will produce in the next several decades. And in an effort to communicate the message that something can still be done about global warming, he resorts, in the book's closing pages, to some corny invocations of America's can-do, put-a-man-on-the-moon spirit.

For the most part, however, Mr. Gore's stripped-down narrative emphasizes facts over emotion, common sense over portentous predictions" an approach that proves considerably more persuasive than the more alarmist one assumed, say, by Tim Flannery in "The Weather Makers." Mr. Gore shows why environmental health and a healthy economy do not constitute mutually exclusive choices, and he enumerates practical steps that can be taken to reduce carbon emissions to a point below 1970's levels.

Mr. Gore, who once wrote an introduction to an edition of Rachel Carson's classic "Silent Spring" (the 1962 book that not only alerted readers to the dangers of pesticides, but is also credited with spurring the modern environmental movement), isn't a scientist like Carson and doesn't possess her literary gifts; he writes, rather, as a popularizer of other people's research and ideas. But in this multimedia day of shorter attention spans and high-profile authors, "An Inconvenient Truth" (the book and the movie) could play a similar role in galvanizing public opinion about a real and present danger. It could goad the public into reading more scholarly books on the subject, and it might even push awareness of global warming to a real tipping point-and beyond.” —MICHIKO KAKUTANI, New York Times

Former vice president Al Gore is co-founder and chairman of both Generation Investment Management and Current TV. He is also a senior partner at Kleiner Perkins Caufield & Byers, and a member of Apple Inc.’s board of directors. Gore spends the majority of his time as chairman of The Climate Reality Project, a nonprofit devoted to solving the climate crisis. Gore was elected to the U.S. House of Representatives four times and the U.S. Senate twice. He served eight years as vice president. He authored the bestsellers Earth in the Balance, An Inconvenient Truth, The Assault on Reason, Our Choice, and The Future. He is a co-recipient of the 2007 Nobel Peace Prize.
Loading...
or support indie stores by buying on
(This book is on backorder)