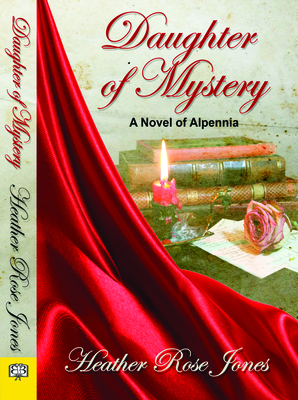 Margerit Sovitre did not expect to inherit the Baron Saveze's fortunes--and even less his bodyguard. The formidable Barbara, of unknown parentage and tied to the barony for secretive reasons, is a feared duelist, capable of defending her charges with efficient, deadly force. Equally perplexing is that while she is now a highly eligible heiress, Margerit did not also inherit the Saveze title, and the new baron eyes the fortunes he lost with open envy. Barbara, bitter that her servitude is to continue, may be the only force that stands between Margerit and the new Baron's greed--and the ever deeper layers of intrigue that surround the ill-health of Alpennia's prince and the divine power from rituals known only as The Mysteries of the Saints. At first Margerit protests the need for Barbara's services, but soon she cannot imagine sending Barbara away--for reasons of state and reasons of the heart.
Heather Rose Jone debuts with a sweeping story rich in intrigue and the clash of loyalties and love.

Heather Rose Jones is the author of the "Skin Singer" stories in Marion Zimmer Bradley's Sword and Sorceress anthology series, as well as non-fiction publications on topics ranging from biotech to historic costume to naming practices. She has a PhD from U.C. Berkeley in Linguistics, specializing in the semantics of Medieval Welsh prepositions, and works as an industrial discrepancy investigator for a major Bay Area pharmaceutical company.
Loading...
or support indie stores by buying on