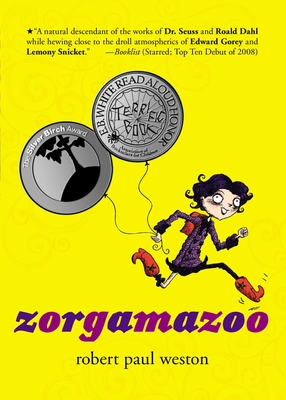 Are You a Believer in Fanciful Things? In Pirates and Dragons and Creatures and Kings?

Then sit yourself down in a comfortable seat, with maybe some cocoa and something to eat, and I'll spin you the tale of Katrina Katrell, a girl full of courage (and daring, as well!), who down in the subway, under the ground, saw something fantastical roaming around . . .

What was it she saw? I'd rather not say. (Who's ever heard of a Zorgle, anyway?)

But if you are curious, clever and brave, if intrepid adventure is something you crave, then open this book and I'll leave it to you to uncover the secret of ZORGAMAZOO!

Join Morty the Zorgle and Katrina on a fantastically illustrated, you'll-wanna-read-every-word-aloud, sophisticated rhyming adventure for kids of all ages!

Robert Paul Weston's first novel was Zorgamazoo, a Booklist top ten debut of 2008. Born in the UK and raised in Canada, Robert Paul Weston lives in Toronto, where he currently teaches creative writing at the University of Toronto.
Loading...
or
Not Currently Available for Direct Purchase