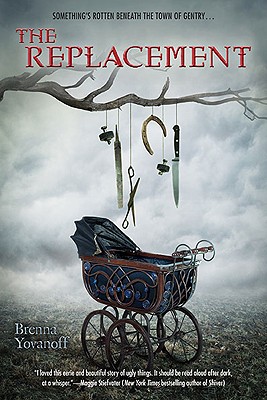 Mackie Doyle is not one of us. Though he lives in the small town of Gentry, he comes from a world of tunnels and black murky water, a world of living dead girls ruled by a little tattooed princess. He is a Replacement-left in the crib of a human baby sixteen years ago. Now, because of fatal allergies to iron, blood, and consecrated ground, Mackie is fighting to survive in the human world.

Mackie would give anything to live among us, to practice on his bass or spend time with his crush, Tate. But when Tate's baby sister goes missing, Mackie is drawn irrevocably into the underworld of Gentry, known as Mayhem. He must face the dark creatures of the Slag Heaps and find his rightful place, in our world, or theirs.

"Edward Scissorhands" meets "The Catcher in the Rye" in this wildly imaginative and frighteningly beautiful horror novel about an unusual boy and his search for a place to belong.

Brenna Yovanoff is one third of the Merry Sisters of Fate along with Maggie Stiefvater and Tessa Gratton, whose flash fiction can be found at www.merryfates.com. She lives in Denver, Colorado. "The Replacement" is her first novel.
Loading...
or
Not Currently Available for Direct Purchase