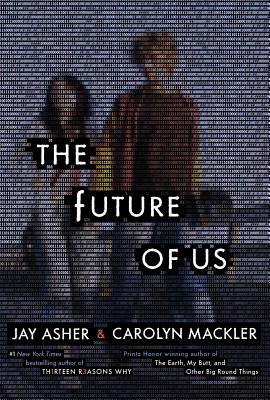 The Future of Us

“The product of a dream collaboration between two very successful authors, this is the story of two teenagers, Josh and Emma, in 1996. Emma gets a computer as a gift, and Josh's mother sends him over to Emma's house with a free AOL disc. Once the disc is loaded and boots up, it shows Emma her Facebook page -- from 2011! Emma lets Josh in on the secret -- it turns out he has a page in 2011 too -- and the weirdness multiplies. Every time either of them makes a decision based on something they learn on Facebook, it changes their future. This fascinating book about the price of decisions and their consequences points out that what you do now can affect you forever. A fabulous read!”
— Jackie Blem, Tattered Cover Book Store, Denver, CO
View the List

It's 1996, and Josh and Emma have been neighbors their whole lives. They've been best friends almost as long--at least, up until last November, when everything changed. Things have been awkward ever since, but when Josh's family gets a free AOL CD-ROM in the mail, his mom makes him bring it over so that Emma can install it on her new computer. When they sign on, they're automatically logged onto Facebook . . . but Facebook hasn't been invented yet. Josh and Emma are looking at themselves fifteen years in the future.

Their spouses, careers, homes, and status updates--it's all there. And every time they refresh their pages, their futures change. As they grapple with the ups and downs of what their lives hold, they're forced to confront what they're doing right--and wrong--in the present.

Jay Asher's first novel, "Thirteen Reasons Why," spent over a year on the "New York Times" bestseller list, with foreign rights sold in over 30 countries and more than 1,000,000 copies in print in the U.S. alone.

Carolyn Mackler is the author of the teen novels "The Earth, My Butt, and Other Big Round Things" (A Michael L. Printz Honor Book), "Tangled," "Guyaholic," "Vegan Virgin Valentine," and "Love and Other Four-Letter Words." In 2008, Carolyn was a judge for the National Book Award for Young People's Literature. She lives in New York City with her husband and two young sons.
or
Not Currently Available for Direct Purchase