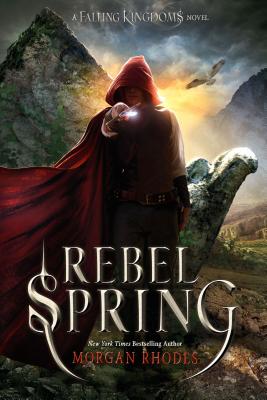 Auranos has been conquered and the three kingdoms—Auranos, Limeros, and Paelsia—are now unwillingly united as one country called Mytica. But alluring, dangerous magic still beckons, and with it the chance to rule not just Mytica, but the world. . . .
When Gaius announces that a road is to be built into the Forbidden Mountains, formally linking all of Mytica together, he sets off a chain of cataclysmic events that will forever change the face of this land.

“From an opening dripping with blood, magic, and betrayal through complex interweaving plots detailing treachery, deceit, and forbidden love, this novel . . . will immediately engage readers and keep them intrigued.”—Booklist
“[It] will gut you emotionally . . . make you ache, cry, and beg for the sequel as you turn the last page. I absolutely loved it.”—Julie Kagawa, New York Times bestselling author of The Iron Queen

“This triple-layered tale of bloodshed, heartbreak, and tangled court intrigue kept me turning pages very late into the night.”—Lesley Livingston, author of Wondrous Strange and Starling


Richelle Mead, bestselling author of the Vampire Academy and Bloodlines series, sits down with Morgan Rhodes to talk about Rebel Spring, the much-anticipated second book in her bestselling Falling Kingdoms series.

Richelle Mead: Morgan Rhodes (aka Michelle Rowen) has been my friend for a number of years. We've hung out together at conferences and swooned over each other's books. When she was able to work on Vampire Academy: The Ultimate Guide, I couldn't believe how lucky I was to have someone who was already a fan of the VA world and whose writing I personally loved. I'm just as excited about her Falling Kingdoms series and couldn't resist this chance to ask her some questions about Rebel Spring, the next book in the series!

Morgan Rhodes: I was thrilled for the chance to write the VA Ultimate Guide! I remember Richelle telling me there were plans for the book and I piped up with: “I totally want to write that!” And what fun it was to delve back into a series that I loved (and am still in love with thanks to the wonderful Bloodlines spinoff). I’m counting down the days for the VA movie! Richelle is not only a friend, but one of my very favorite authors, so it’s a real honor to be interviewed by her about Rebel Spring.

RM: So without further ado, let’s start talking about the new book. The world of Falling Kingdoms is so vivid and detail-rich. When it comes to world-building for these novels, where do you get your inspiration?

MR: I get my inspiration from pretty much everywhere, although I’m visually inspired by some of my favorite TV shows and movies, which run the gamut from Lord of the Rings to The Princess Bride to Game of Thrones, to name just a few.

RM: At the end of Falling Kingdoms, things are looking pretty bleak in Mytica. Is it fair to say that Rebel Spring will be quite a bit darker than book 1?

MR: The stakes have been raised and sharpened, for sure. Blood will spill and lives will be lost. But I don’t think I would ever want to write a book that was unrelentingly bleak from beginning to end. I can promise that Rebel Spring contains plenty of comic relief and romance to counterbalance the darker bits.

RM: The Falling Kingdoms books are written from multiple POVs, and each of your narrators has such a unique voice and perspective. How does your experience vary from POV to POV? Are there some characters that are more difficult than others? Do you have a favorite?

MR: It’s been a wonderful and exciting challenge to write in multiple points of view from my diverse cast. I will admit, some POVs are always a joy to write and others prove to be a challenge. I try to put myself in the head of that character and see the world from their eyes, no matter who they are or what their goals are. I get into the heads of a couple different characters in Rebel Spring, including a villain who definitely sees things from a darker angle than anything I’ve written before – which was fun. The characters whose scenes I most look forward to writing since they are very specific personalities and basically take over and make things easier for me are Cleo and Magnus. They tend to surprise me while the other characters usually stick to the outline!

RM: Let’s talk body count. You’re very good at making me fall in love with your characters, but you’re also very good at killing them off when I least expect it. How do you decide the who, how, when, and why when it comes to killing off your characters?

MR: I never knew how much I enjoyed killing characters until I started writing this series. *evil grin* However! I like to think those who get the ax (sometimes, um, literally) are necessary deaths. It’s all for a purpose, to change another character in the face of their shock and grief, to lead them down a path they never would have taken before, and to spark a desire for revolution and vengeance in the hearts of those who might previously have been passive and peaceful. Plus, I always think when things seem a bit too ideal and characters are getting too comfortable, it’s a good time to get a few heads rolling to keep things interesting for readers – and for me as the writer!

RM: What’s going on with Magnus? He seems like kind of a jerk in Falling Kingdoms, but I get the sense he’s got a soft spot.

MR: With a father like King Gaius, whose nickname is the “King of Blood,” it would be pretty hard for a prince to grow up as a nice dude with a sunny disposition! Magnus really came alive on the page for me, more so than any other character in the cast. Initially, he was supposed to be a jerk through and through, but he’s really more of a lost soul whose entire life has been devoted to attempting to gain his cruel and driven father’s love and respect. However, Magnus has begun to learn that he might have a different set of morals than the king, even though he knows following in Daddy’s footsteps would make life easier for him. This isn’t to say that Magnus hasn’t made (and will make) some rather dreadful decisions that will certainly cast a shadow over his future relationships and experiences.

RM: Jonas has a lot of axes to grind by the end of book 1. What can we expect from him in Rebel Spring?

MR: I think the main thing with Jonas is that beneath his thirst for vengeance (focused on both the murderer of his brother Aron and King Gaius) is that he really does mean well. He cares about the people of downtrodden Paelsia, and he’s someone, unlike his fellow countrymen, who doesn’t believe his future is ruled by uncontrollable fate. In Rebel Spring, Jonas has been thrust into the position of rebel leader, which will be a challenge for him on many levels.

RM: Okay, ultimate personality test: Are you a Cleo or a Lucia?

MR: Both are princesses from vastly different kingdoms and upbringings – Cleo is a girl who has favored parties and frivolity in the past, while Lucia prefers learning and solitude. Cleo is stubborn and sometimes reckless, and Lucia is more measured and controlled, but may be considered naïve in many ways. I wouldn’t say I’m much like either princess, really, although I am blond like Cleo and I love books like Lucia. :)

RM: Lastly, can you talk a little bit about your writing process?

MR: It would be next to impossible to undertake a large tapestry of a series like Falling Kingdoms if I didn’t plan a lot of it ahead of time. I work from a detailed outline and map out character goals and conflicts and relationship arcs, but I’m still surprised by some of the things my characters say and do that can take me in a direction different from what was meticulously planned. So far, it’s been a lot of fun to explore these unexpected paths to see where they lead.

Morgan Rhodes is the New York Times bestselling author of the Falling Kingdoms series. Under another pen name, she's an award winning author of more than two dozen novels. Morgan lives in Southern Ontario, where she’s currently hard at work on the next Falling Kingdoms book.
Loading...
or
Not Currently Available for Direct Purchase