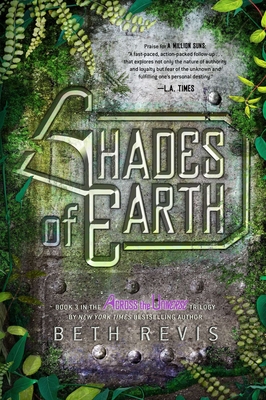 An Across the Universe Novel

The final book in the New York Times bestselling trilogy, perfect for fans of Battlestar Galactica and Prometheus!

Amy and Elder have finally left the oppressive walls of the spaceship Godspeed behind. They're ready to start life afresh—to build a home—on Centauri-Earth, the planet that Amy has traveled 25 trillion miles across the universe to experience.

But this new Earth isn't the paradise Amy had been hoping for. There are giant pterodactyl-like birds, purple flowers with mind-numbing toxins, and mysterious, unexplained ruins that hold more secrets than their stone walls first let on. The biggest secret of all? Godspeed's former passengers aren't alone on this planet. And if they're going to stay, they'll have to fight.

Amy and Elder must race to discover who—or what—else is out there if they are to have any hope of saving their struggling colony and building a future together. They will have to look inward to the very core of what makes them human on this, their most harrowing journey yet. Because if the colony collapses? Then everything they have sacrificed—friends, family, life on Earth—will have been for nothing.

Beth Revis is the author of the New York Times bestselling Across the Universe series. Beth lives in rural North Carolina with her husband and dog, and believes space is nowhere near the final frontier.

Praise For Shades of Earth: An Across the Universe Novel…

PRAISE FOR SHADES OF EARTH:

"A fabulous job of integrating science fiction and YA romance."—USAToday.com

"Great science fiction...recommend[ed] for both teenagers and adults." —Wired.com

"Comes to a fittingly explosive conclusion in this satisfying series ender. . . . A propulsive storyteller with a knack for jarring surprises and raising the stakes." —Booklist

"Throughout the series, Revis has brought real and immediate emotions to sci-fi scenarios . . . and here she invests that skill in making readers feel, along with her protagonists, the awe and wonder facing humanity as the characters step out onto an alien planet for the first time."  —Horn Book Reviews

"Brings it home on a planet far from home." –Kirkus Reviews

"A murder mystery, a budding romance, and a dystopian world gracefully integrated into a sci-fi novel that blows away all expectation." —Melissa Marr, New York Times bestselling author of Wicked Lovely

"A fast-paced, action-packed follow-up . . . that explores not only the nature of authority and loyalty but fear of the unknown and fulfilling one's personal destiny." —LA Times
or support indie stores by buying on
Copyright © 2020 American Booksellers Association