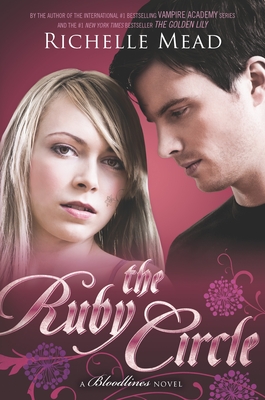 The epic conclusion to Richelle Mead’s bestselling Bloodlines series is now in paperback....

Their forbidden romance exposed, Sydney and Adrian find themselves facing the wrath of both the Alchemists and the Moroi in this electrifying conclusion to Richelle Mead’s bestselling Bloodlines series.

When the life of someone they both love is put on the line, Sydney risks everything to hunt down a deadly former nemesis.  Meanwhile, she and Adrian become enmeshed in a puzzle that could hold the key to a shocking secret about spirit magic, a secret that could shake the entire Moroi world and alter their lives forever.

They will be tested, but LOVE WILL CONQUER ALL.

Praise For The Ruby Circle: A Bloodlines Novel…

“With all the magic, vampires, and steamy scenes, you'll be so grateful for this escape...”
--Seventeen.com

Richelle Mead is the author of the international #1 bestselling Vampire Academy series, its bestselling spinoff series Bloodlines, and the forthcoming fantasy standalone Soundless. A lifelong reader, Richelle has always had a particular fascination with mythology and folklore. When she can actually tear herself away from books (either reading or writing them), she enjoys bad reality TV, traveling, trying interesting cocktails, and shopping for dresses to wear on tour. She is a self-professed coffee addict, works in her pajamas, and has a passion for all things wacky and humorous. Originally from Michigan, Richelle now lives in Seattle, Washington, where she is hard at work on her next novel. Visit www.RichelleMead.com to find out more.
Loading...
or support indie stores by buying on