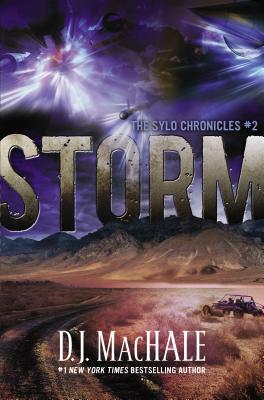 From D.J. MacHale—the #1 New York Times bestselling author and co-creator of the popular Nickelodeon series Are You Afraid of the Dark?—comes STORM, the exhilarating, action-packed sequel to SYLO:

After a harrowing escape from Pemberwick Island, Tucker Pierce and his surviving friends—Tori, Kent, and Olivia—have finally reached the mainland, only to find that no one is left.

That’s not their only sickening discovery. Moments before they are attacked by another of the mysterious black planes, they investigate one’s wreck and are horrified to find that it bears the logo of the U.S. Air Force. This can only mean one thing: the United States is at war with itself—the deadly technology of the Air Force against the brute force of the Navy’s SYLO unit, which still holds Pemberwick Island and its residents captive.

Tucker must lead his friends to safety, but his head is spinning. How can the Air Force be perpetuating such genocide against not only its own citizens, but the world? What is SYLO’s role in this, and why did Tucker’s parents betray him by allying with SYLO, whose commander, Captain Granger, killed Tori’s father at point-blank range? And what did his mother mean when she told him to trust no one?

Tucker, Tori, and friends set off cross-country on a quest for answers and, for Tucker, vengeance. But as one highway gives way to the next—and one death-defying escape precedes another—Tucker soon realizes that “trust no one” doesn’t just mean the U.S. military.

Praise For Storm: The SYLO Chronicles #2…

"With this extremely high-octane story that's the equivalent to a summer movie blockbuster, MacHale kicks off an apocalyptic trilogy sure to leave readers demanding the next installment."—Booklist

"This action-filled, end-of-the-world-as-we-know-it adventure... should leave teen readers clamoring for the next installment." --VOYA

"An entertaining and creepy tale."—Publishers Weekly

"MacHale pens some terrific and unique action scenes... will leave readers hungry for the next installment." --School Library Journal

D.J. MacHale is the author of the bestselling book series Pendragon: Journal of an Adventure through Time and Space, the spooky Morpheus Road trilogy, and the whimsical picture book The Monster Princess. He has written, directed, and produced numerous award-winning television series and movies for young people including Are You Afraid of the Dark?, Flight 29 Down, and Tower of Terror. D.J. lives with his family in Southern California. You can visit him online at www.djmachalebooks.com.
Loading...
or
Not Currently Available for Direct Purchase