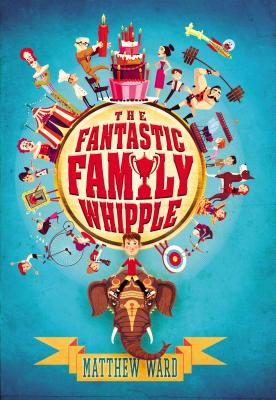 For every child who's ever dreamed of being in the "Guinness Book of World Records" comes the story of eleven-year-old Arthur Whipple and his fantastic family of world record breakers . . .
- Most Creme Brulee Eaten in One Minute
- Highest Number of Matching Outfits Worn by a Stuffed Toy and Its Owner
- Youngest Person to Summit the Third-Highest Mountain in the World
These are just three of the 49,521 records won by Arthur's twelve brothers and sisters. Unfortunately, unlike his siblings, Arthur hasn t broken a single, solitary world record But when the Whipples suffer a spate of catastrophes and a curiousamount of attention from a pair of irregularly sized and unusually menacing clowns, Arthur might be the only one who can save his family from losing their collective crown . . . or worse.
A 2013 BOOK EXPO AMERICA (BEA) BUZZ PANEL SELECTION

Though Matthew Ward was crowned back-to-back School Spelling Bee Champion in the third and fourth grades, his childhood passed with little international distinction. In 2006, he was named the World's First TiVo Ambassador. He lives in San Diego with his wife and son. "The Fantastic Family Whipple" is his debut.

Praise For The Fantastic Family Whipple…

"Echoes of Roald Dahl.... A genuinely fun and comically ludicrous romp, clearly worthy of Most World Records Outside of a World Records Book." --Publishers Weekly

"One of the most fun listening experiences of the year." --Publishers Weekly on the audio edition, starred review

"A rollicking, record-breaking romp, running rife with riotous ribaldry! And featuring even more r's than this quote!"--Robert Paul Weston, award-winning author of Zorgamazoo and The Creature Department