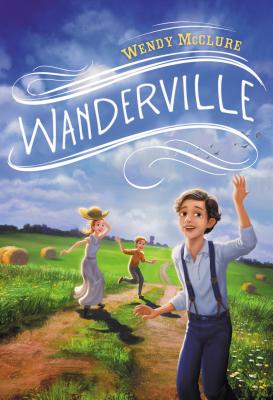 THE FIRST BOOK IN A HISTORICAL SERIES THAT'S PERFECT FOR FANS OF THE BOXCAR CHILDREN!

Jack, Frances, and Frances’s younger brother Harold have been ripped from the world they knew in New York and sent to Kansas on an orphan train at the turn of the century. As the train chugs closer and closer to its destination, the children begin to hear terrible rumors about the lives that await them. And so they decide to change their fate the only way they know how. . . .

They jump off the train.

There, in the middle of the woods, they meet a boy who will transform their lives forever. His name is Alexander, and he tells them they've come to a place nobody knows about—especially not adults—and "where all children in need of freedom are accepted." It's a place called Wanderville, Alexander says, and now Jack, Frances, and Harold are its very first citizens.

“… A page-turner that will have readers eagerly waiting for the next installment. For those who want more background, the book includes a brief explanation of the Orphan Train Movement. Readers may wonder how children can survive on their own. Here, the strong characters make it plausible.” —Booklist

“McClure celebrates bravery, ingenuity, and the bonds of family and friendship in this old-fashioned story of children fending for themselves, building a community, and eluding the adults who seek them… Readers should enjoy vicariously participating in the children’s independence and will appreciate their hard-earned triumphs.”—Publishers Weekly

“Readers will be swept away by the bravery of the young heroes… Readers of series fiction who enjoy learning about the past will gravitate toward this accessible novel and will be impatient for the sequel.”—School Library Journal

"The idea of a kid-run town in the woods and all the rustically domestic details that entails will appeal greatly to the same kind of kids who love the Boxcar Children’s hidden home." —Bulletin of the Center for Children's Books

"A thoroughly enjoyable, fast-paced adventure."  —Caroline Starr Rose, author of May B

Wendy McClure (WendyMcClure.net) is the author of The Wilder Life: My Adventures in the Lost World of Little House on the Prairie and several other books for adults and children. She is a senior editor at Albert Whitman and Company, where her recent projects include books in the Boxcar Children series. She received an MFA from the Iowa Writer’s Workshop and has been a contributor to the New York Times Magazine and This American Life. She lives in Chicago with her husband.
or
Not Currently Available for Direct Purchase