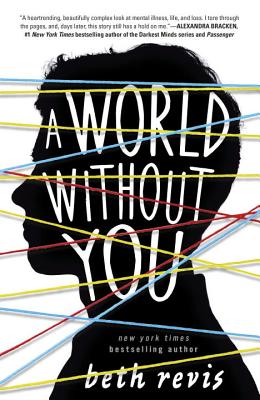 A World Without You

What would you do to bring back someone you love? After the unexpected loss of his girlfriend, a boy suffering from delusions believes he can travel through time to save her in this gripping new novel from New York Times bestselling author Beth Revis.

“Revis’s account of grief, loss, first love, and anguish, presented through a lens of mental illness, is a must-read.” —VOYA, starred review

“A heartrending, beautifully complex look at mental illness, life, and loss. I tore through the pages, and, days later, this story still has a hold on me.” —Alexandra Bracken, #1 New York Times bestselling author of The Darkest Minds series and Passenger

Seventeen-year-old Bo has always had delusions that he can travel through time. When he was ten, Bo claimed to have witnessed the Titanic hit an iceberg, and at fifteen, he found himself on a Civil War battlefield, horrified by the bodies surrounding him. So when his concerned parents send him to a school for troubled youth, Bo assumes he knows the truth: that he’s actually attending Berkshire Academy, a school for kids who, like Bo, have "superpowers."

At Berkshire, Bo falls in love with Sofia, a quiet girl with a tragic past and the superpower of invisibility. Sofia helps Bo open up in a way he never has before. In turn, Bo provides comfort to Sofia, who lost her mother and two sisters at a very young age.

But even the strength of their love isn’t enough to help Sofia escape her deep depression. After she commits suicide, Bo is convinced that she's not actually dead. He believes that she's stuck somewhere in time — that he somehow left her in the past, and now it's his job to save her.

Not since Ned Vizzini’s It’s Kind of a Funny Story has there been such a heartrending depiction of mental illness. In her first contemporary novel, Beth Revis guides readers through the mind of a young man struggling to process his grief as he fights his way through his delusions. As Bo becomes more and more determined to save Sofia, he has to decide whether to face his demons head-on, or succumb to a psychosis that will let him be with the girl he loves.

Praise For A World Without You…

"The voices of both narrators are impossible to ignore as the lines between flawed visions and reality blur in a powerful revelation of the delusional and paranoid mind. Revis’s account of grief, loss, first love, and anguish, presented through a lens of mental illness, is a must-read." —VOYA, starred review

"A gripping exploration of a young man’s struggle with delusions and grief." —Booklist

"A compelling peek into the darkest corners of mental illness." —School Library Journal

"A painfully brilliant and transporting read. This novel has the rare superpower to change and save lives." —Adam Silvera, New York Times bestselling author of More Happy Than Not

"A World Without You tackles grief, mental illness, and family dynamics with both grace and generosity. I fell in love with Bo’s story of perseverance in the face of seemingly endless struggle and was left brimming with hope. Readers will emerge from this book a little stronger than when they entered.” —Emily Henry, author of The Love That Split the World

“Beth Revis delivers us an astonishing shape-shifter of a tale that dazzles and startles at every tense turn. Themes of love, secrets, and heartbreak are woven into a taut and bewitching narrative that will pull you in and not let you go. Don't forget to breathe.” —Adele Griffin, author of The Unfinished Life of Addison Stone

“A World Without You is a beautiful, devastating, mind-bending adventure.” —Suzanne Young, New York Times bestselling author of The Program series

Beth Revis grew up in the Appalachian mountains with a cemetery in her backyard, which is probably why she prefers her stories to be dark and full of twists. She's the New York Times bestselling author of the Across the Universe trilogy, which has been translated into over twenty languages. Beth lives in a house full of boys—her husband, son, and two massive dogs—and she forces them all to watch reruns of Firefly and Doctor Who. Visit her at bethrevis.com and on Twitter @bethrevis.
Loading...
or
Not Currently Available for Direct Purchase