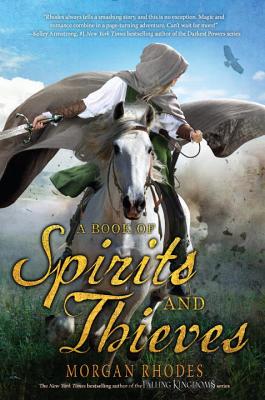 A Book of Spirits and Thieves

“A modern day Outlander. . . . filled with adventure and danger. . . . a breathless tale that only Morgan Rhodes could tell.”—Hypable

The lives of Toronto teens Crystal and Becca Hatcher revolve around helping their mother out at the family's used bookstore, the Speckled Muse. It's a relatively uneventful after-school job, until a package arrives addressed to their mother, Julia. Thinking it's nothing more than run-of-the-mill inventory, Becca opens it and removes the book inside, unwittingly triggering an ancient magic and intertwining their fates with the powers that flow from the mysterious leather-bound book. Two parallel worlds collide, and Becca is left in a catatonic state after her spirit is snatched from modern-day Toronto back to the ancient world of Mytica. Crys is guilt-ridden, having witnessed the entire event, and vows to do whatever is necessary to save her.

Written in alternating perspectives that shift between modern-day Toronto and the ancient kingdoms of Mytica, Rhodes delivers a rich and suspenseful series opener that will leave readers breathless.

Praise For A Book of Spirits and Thieves…

“...Many intriguing twists and turns with a downright fantastic plot.” —VOYA

"Rhodes always tells a smashing story, and this is no exception. Magic and romance combine in a page-turning adventure. Can’t wait for more!” —Kelley Armstrong, #1 New York Times bestselling author of the Darkest Powers series

"Magical, smart and swoony, A Book of Spirits and Thieves is the most fun I've had reading a book in a long time.” —Rachel Hawkins, New York Times bestselling author of the Hex Hall and Rebel Belle series

“Strong writing yields a story that feels like a roller-coaster ride, filled with rich and suspenseful anticipation.” —School Library Journal

Morgan Rhodes is the New York Times bestselling author of the Falling Kingdoms series. Under another pen name, she's an award-winning author of more than two dozen novels. Morgan lives in Southern Ontario, where she’s currently hard at work on the next Falling Kingdoms book. Follow her on Twitter @MorganRhodesYA.
Loading...
or
Not Currently Available for Direct Purchase