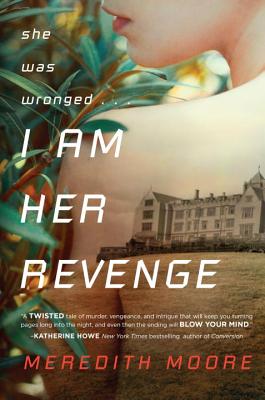 I Am Her Revenge

She can be anyone you want her to be.
Vivian was raised with one purpose in life: to exact revenge on behalf of her mother. Manipulative and cruel, Mother has deprived Vivian not only of a childhood, but of an original identity. With an endless arsenal of enticing personalities at her disposal, Vivian is a veritable weapon of deception.

And she can destroy anyone.
When it’s time to strike, she enrolls in a boarding school on the English moors, where she will zero in on her target: sweet and innocent Ben, the son of the man who broke Mother’s heart twenty years ago.

Anyone…except for the woman who created her.
With every secret she uncovers, Vivian comes one step closer to learning who she really is. But the more she learns about herself, the more dangerous this cat and mouse game becomes. Because Mother will stop at nothing to make sure the truth dies with her.

Praise For I Am Her Revenge…

"Meredith Moore's mind-bending debut grips on every page. I loved this wicked take on La Femme Nikita set in the privileged, dark, compelling world of an English prep school. I Am Her Revenge is a twisted tale of murder, vengeance, and intrigue that will keep you turning pages long into the night, and even then the ending will blow your mind." –Katherine Howe, New York Times bestselling author of Conversion

"Dark and twisty goodness! Thrilling and moving all at once. You won't be able to look away! –Sophie Jordan, the international and New York Times bestselling author of the Firelight and Debutante Files series

Meredith Moore graduated from Harvard University with a degree in History, focusing on early modern England and France. She lives in Houston, Texas, where she loves pumpkin spice lattes, 19th century British literature, and road trips. I Am Her Revenge is her debut novel.
Loading...
or
Not Currently Available for Direct Purchase