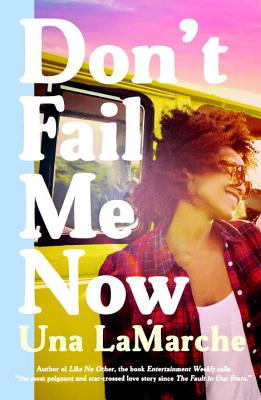 From the author of Like No Other, the novel Entertainment Weekly calls "One of the most poignant and star-crossed love stories since The Fault in Our Stars": What if the last hope to save your family is the person who broke it up to begin with?

"Fans of John Green, Rainbow Rowell, and Sharon Flake will find much to love in [Don't Fail Me Now]."
--School Library Journal

Michelle and her little siblings Cass and Denny are African-American and living on the poverty line in urban Baltimore, struggling to keep it together with their mom in jail and only Michelle’s part-time job at the Taco Bell to sustain them.

Leah and her stepbrother Tim are white and middle class from suburban Maryland, with few worries beyond winning lacrosse games and getting college applications in on time.

Michelle and Leah only have one thing in common: Buck Devereaux, the biological father who abandoned them when they were little.

After news trickles back to them that Buck is dying, they make the uneasy decision to drive across country to his hospice in California. Leah hopes for closure; Michelle just wants to give him a piece of her mind.

Five people in a failing, old station wagon, living off free samples at food courts across America, and the most pressing question on Michelle’s mind is: Who will break down first--herself or the car? All the signs tell her they won’t make it. But Michelle has heard that her whole life, and it’s never stopped her before....

Una LaMarche triumphs once again with this rare and compassionate look at how racial and social privilege affects one family in crisis in both subtle and astonishing ways.

Una LaMarche is a writer and journalist whose work has appeared regularly in the New York Observer and on the Huffington Post. She is the author of Five Summers, Like No Other and Unabrow, a collection of humorous essays based on some of her more questionable life choices. Una lives in Brooklyn with her husband and son. Find out more at unalamarche.com or follow her on Twitter @sassycurmudgeon

Praise For Don't Fail Me Now…

"Perfect pacing and engaging characters will draw readers in, and they will empathize as the mismatched group of kids figures out what family really means. LaMarche’s poignant novel examines many tough issues and does so within a story that sings with hope."
--Booklist

"A highly relevant and necessary part of our conversation about race, poverty, and privilege. This is a must read."
--Voice of Youth Advocates

"A fantastic look at the dynamics of every kind of family."
—Refinery29

"[Michelle's] determination to survive in spite of everything is convincing, and her voice rings true. This story of teen resilience will resonate with readers."
--Kirkus Reviews

"Una LaMarche gave us the swoons last year with Like No Other, and this time around she turns her attention from forbidden first love to a complicated family. But, don't worry, Don't Fail Me Now has the same poignant observations of racial and societal privilege weaved into a memorable story that you love her for."
--Bustle

"An excellent look at how race and socioeconomic status can impact children’s lives... Serious issues are tempered with humor for a very readable novel. Fans of John Green, Rainbow Rowell, and Sharon Flake will find much to love in [Don't Fail Me Now]."
--School Library Journal