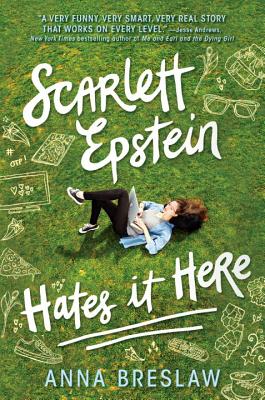 Cross Veronica Mars with MTV's Daria, and you’ll get Scarlett Epstein, the snarky, judgmental, and often hilarious star of Scarlett Epstein Hates It Here, a witty and heartwarming novel that’s perfect for fans of David Arnold’s Mosquitoland and Kody Keplinger’s The Duff.

"Absolutely delightful, the kind of book you'll be reading for an hour before you realize you've been grinning the whole time." —Buzzfeed
"A sparkling, unabashedly feminist debut." —Kirkus Reviews, Starred Review
"Rainbow Rowell’s Fangirl meets Harriet the Spy in this coming-of-age tale filled with emotional resonance."—TeenVogue.com

When Scarlett’s beloved TV show is canceled and her longtime crush, Gideon, is sucked out of her orbit and into the dark and distant world of Populars, Scarlett turns to the fanfic message boards for comfort. This time, though, her subjects aren’t the swoon-worthy stars of her fave series—they’re the real-life kids from her high school. Scarlett never considers what might happen if they were to find out what she truly thinks about them...until a dramatic series of events exposes a very different reality than Scarlett's stories, forever transforming her approach to relationships—both online and off.

"Absolutely delightful, the kind of book you'll be reading for an hour before you realize you've been grinning the whole time. Sarcastic, hilarious, and secretly sensitive Scarlett will be immediately recognizable to anyone who spent their teenage years unsure of what they were doing or where they fit in (i.e., anyone who was ever a teenager).” —Buzzfeed

"Though her life is full of good people—her mother, her best friend, Avery, her delightfully vinegary neighbor Ruth—who hold up loving mirrors to her most judgmental, emotionally distancing impulses, Scarlett stubbornly sees herself as an underachieving loner with a uniquely sophisticated read on the world…readers will quickly see what Scarlett doesn’t: that she pushes people away, that her underachievement is a pose, that she’s often thoughtlessly cruel and self-absorbed, and that’s she’s worth rooting for anyway. A sparkling, unabashedly feminist debut.” —Kirkus Reviews, Starred Review

“Super-realistic and laugh-out-loud funny…By the time you're done, you seriously might grab your cell to text Scarlett and then feel bummed when you remember she's a fictional character.” —Seventeen

"Scarlett is very funny, and her first-person narration is full of snappy literary and cultural references that will endear her to readers. But Breslaw doesn’t allow her heroine to hide behind her wit. Eventually, Scarlett begins to truly see the pain and beauty of reality. A perfect match for fans of Rainbow Rowell's Fangirl." —Booklist

“[Scarlett] is acerbically clever and surly in all the best ways….Fans of character-driven stories, members of fandoms, and teens who live on Tumblr will devour this immensely readable and hilarious story.” —VOYA

“A very funny, very smart, very real story that works on every level. Scarlett Epstein is the hardest kind of character to pull off: someone at once heart-stirringly familiar and totally unique. Anna Breslaw has a beautifully calibrated ear for how people talk, type, and think." —Jesse Andrews, New York Times bestselling author of Me and Earl and the Dying Girl

"Laughs, pop culture, and heart: Welcome to Anna Breslaw's world. You'll love it here." —DC Pierson, author of Crap Kingdom and The Boy Who Couldn't Sleep and Never Had To

"Scarlett Epstein is so funny and smart it makes me wish I were her when I was a dorky Jewish teen.” —Megan Amram, author of Science…For Her!

"Fresh, raw, immediate and true. Scarlett Epstein Hates It Here feels so hip and now and yet somehow echoes back to Judy Blume.  I fell in love with Scarlett and cried the kind of reading tears that slide down your temples and pool in your ears.  It’s also laugh-through-your-tears funny, though, and gets five Jersey tomatoes from this girl who knows Jersey.”—Wendy Wunder, author of The Probability of Miracles and The Museum of Intangible Things

Anna Breslaw is a writer whose work has been in New York Magazine, the New York Times, Cosmopolitan, Jezebel, the Guardian, and elsewhere. She lives in New York and Tweets (mostly weird jokes) @annabreslaw.
Loading...
or
Not Currently Available for Direct Purchase