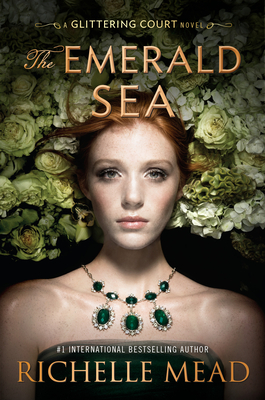 The Emerald Sea (The Glittering Court #3)

The final installment in Richelle Mead's sweeping, enthralling Glittering Court series answers the trilogy's biggest question: what is the secret that drives Tamsin to win at all costs?

Tamsin Wright is unstoppable. She must become the Glittering Court's diamond: the girl with the highest test scores, the most glamorous wardrobe, and the greatest opportunities to match with an elite suitor in the New World. Training alongside other girls in the Glittering Court, Tamsin immerses herself completely in lessons about etiquette, history, and music--everything a high-society wife would need to know. Once she's married, she'll be able to afford a better life for her family, so the sacrifice is worth it if she can be the best.

When her friendship with Mira and Adelaide, her roommates at the Glittering Court, threatens her status as the top-ranked prospect, she does the only thing she knows will keep her on track: she cuts them out of her life. But when her voyage across the sea goes off course, Tamsin must use her unrelenting grit and determination to survive the harsh winter far north of her intended destination in hopes of making it back to the Glittering Court in time to secure a proposal--and a comfortable future for her family.

Experiencing new cultures and beliefs for the first time, Tamsin realizes that her careful studies haven't prepared her for everything, and with new alliances formed with roguish tradesman Jago Robinson and good-natured minister Gideon Stewart, Tamsin's heart begins to be pulled in different directions. But she can't let her brewing attraction get in the way of her ultimate goal: protecting the secret she holds closest to her heart, the one that would unravel everything she's worked for if it's uncovered.

Richelle Mead is the author of the international #1 bestselling Vampire Academy series, the Bloodlines series, the Glittering Court series, and the Age of X series. Her love of fantasy and science fiction began at an early age when her father read her Greek mythology and her brothers made her watch Flash Gordon. She went on to study folklore and religion in college, and when not writing, Richelle spends her time drinking lots of coffee, watching reality TV, and shopping for dresses.
Loading...
or support indie stores by buying on