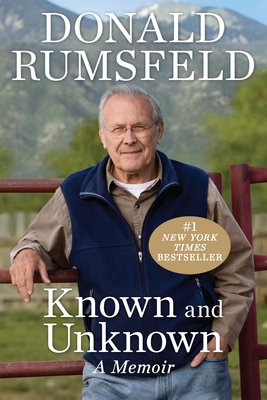 Few Americans have spent more time near the center of power than Donald Rumsfeld, whose widely commented-on memoir offers many previously undisclosed details about his service with four U.S. presidents. We follow his rise from a middle-class childhood to the Navy to a seat in the U.S. Congress at age thirty, and his experiences there during the Vietnam War and the Civil Rights era. We also get his unique perspective as a cabinet-level member of the Nixon and Ford administrations, as CEO of two Fortune 500 companies, and as a special envoy to the Middle East for President Reagan.

Rumsfeld also addresses the challenges and controversies of his time as Secretary of Defense during the 9/11 attacks by al-Qaida and the wars in Afghanistan and Iraq. He includes candid observations on the differences of views within the Pentagon and with other members of President George W. Bush’s National Security Council.

In a famous press briefing, Rumsfeld once said that “There are also unknown unknowns . . . things we do not know we don’t know.” His book makes us realize just how much we didn’t know.

Praise For Known and Unknown: A Memoir…

“A serious stab at telling the history of a consequential period in America through the eyes of one of its most consequential players.”
—PETER BAKER, The New York Times

“I don’t care whether you’re . . . a liberal or a conservative or something else: If you’re interested in this period of history, the book is a total feast.”
—JAY NORDLINGER, National Review

“A meaty, well-written book that will be a primary source for historians . . . This power memoir deserves to be read with the care that went into writing it.”
—CHRISTOPHER BUCKLEY, BusinessWeek

Donald Rumsfeld was the 13th and 21st U.S. Secretary of Defense. He currently chairs the Rumsfeld Foundation, which supports leadership and public service at home and the growth of free political and free economic systems abroad. The Rumsfeld Foundation funds microfinance development projects, fellowships for graduate students interested in public service, the development of young leaders from Central Asia and the Caucasus, and charitable causes that benefit the men and women of the U.S. armed forces and their families.
Loading...
or support indie stores by buying on