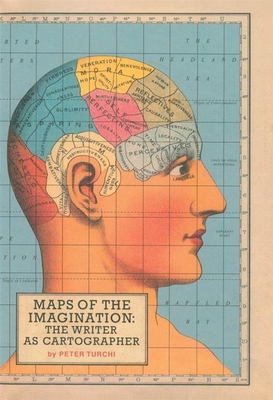 Maps of the Imagination

The Writer as Cartographer

Maps of the Imagination takes us on a magic carpet ride over terrain both familiar and exotic. Using the map as a metaphor, fiction writer Peter Turchi considers writing as a combination of exploration and presentation, all the while serving as an erudite and charming guide. He compares the way a writer leads a reader though the imaginary world of a story, novel, or poem to the way a mapmaker charts the physical world. "To ask for a map," says Turchi, "is to say, 'Tell me a story.' "
With intelligence and wit, the author looks at how mapmakers and writers deal with blank space and the blank page; the conventions they use or consciously disregard; the role of geometry in maps and the parallel role of form in writing; how both maps and writing serve to re-create an individual's view of the world; and the artist's delicate balance of intuition with intention.
A unique combination of history, critical cartography, personal essay, and practical guide to writing, Maps of the Imagination is a book for writers, for readers, and for anyone interested in creativity. Colorful illustrations and Turchi's insightful observations make his book both beautiful and a joy to read.

Called "one of the country's foremost thinkers on the art of writing" by the Houston Chronicle, Peter Turchi's books include A Muse and a Maze: Writing as Puzzle, Mystery, and Magic, Maps of the Imagination: The Writer as Cartographer; Suburban Journals: The Sketchbooks, Drawings, and Prints of Charles Ritchie, in collaboration with the artist; a novel, The Girls Next Door; and a collection of stories, Magician. Turchi's short story "Night, Truck, Two Lights Burning," listed as one of 100 Notable Stories of 2002 by the editors of Best American Short Stories and one of 15 Recommended Stories by the jury for the O. Henry Prize Stories, has been published in Arabic and, in English, combined with images by Charles Ritchie, in a limited edition artist's book. He has also coedited, with Andrea Barrett, A Kite in the Wind: Fiction Writers on Their Craft and The Story Behind the Story: 26 Stories by Contemporary Writers and How They Work; and, with Charles Baxter, Bringing the Devil to His Knees: The Craft of Fiction and the Writing Life. Turchi's stories have appeared in Ploughshares, Story, the Alaska Quarterly Review, Puerto del Sol, and the Colorado Review. He has received Washington College's Sophie Kerr Prize, an Illinois Arts Council Literary Award, North Carolina's Sir Walter Raleigh Award, and fellowships from the National Endowment for the Arts and the John Simon Guggenheim Memorial Foundation. From 1993 to 2008 he directed the MFA Program for Writers at Warren Wilson College in Asheville, North Carolina. Turchi recently taught at Arizona State University, where he was director of the creative writing program, and he's currently a professor of creative writing at the University of Houston.
Loading...
or
Not Currently Available for Direct Purchase