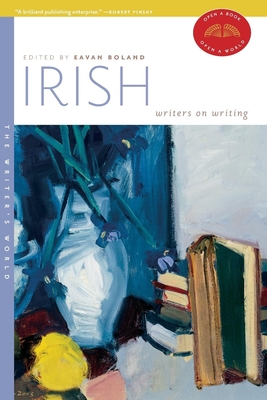 What does it mean to be a writer in the context of a country's centuries of uncertainty and upheaval? How does an Irish writer define Irish writing? The writers here, who range from early legends like Yeats to modern masters like Roddy Doyle, address these questions through their sources: the land, the Church, the past, and changing politics and literary styles. The book begins with William Yeats and Augusta Gregory's dazzling meditations on the founding of the National Theatre as a venue for a new Irish imagination. Lady Gregory herself is the subject of pithy essays by Kate O'Brien and Colm Toibin. Poets discuss their peers -- Corkery on the Gaelic poets; Frank O'Connor on Corkery; O'Casey on Yeats; Roddy Doyle on Synge. Emma Donoghue illuminates the life of a lesbian Irish writer, while John Banville excoriates Bloomsday and "the pervasiveness and bathos of the Joyce myth." Irish Writers on Writing raises a toast to one of the world's most vital literary traditions.

Edward Hirsch was born in Chicago and educated both at Grinnell College and the University of Pennsylvania, where he received a Ph.D. in folklore. His first collection of poems, For the Sleepwalkers (1981), received the Academy of American Poets Lavan Younger Poets Award and the Delmore Schwartz Memorial Award. His second collection, Wild Gratitude, received the National Book Critics Circle Award. His recent poetry collections include The Living Fire: New and Selected Poems, Special Orders, Lay Back the Darkness, On Love, Earthly Measures, and The Night Parade. He is also the author of the prose books The Demon and the Angel: Searching for the Source of Artistic Inspiration, Responsive Reading, and the national bestseller How to Read a Poem and Fall in Love with Poetry, which poet Garrett Hongo called "the product of a lifetime of passionate reflection" and "a wonderful book for laureate and layman both." Most recently, Hirsch published Poet's Choice, which collects two years' worth of his weekly essay letters from the Washington Post Book World. Hirsch's honors include the Academy of Arts and Letters Award, the Ingram Merrill Foundation Award, the Lila Wallace-Reader's Digest Writers' Award, the Rome Prize, and fellowships from the Guggenheim Foundation, the MacArthur Foundation, and the National Endowment for the Arts. In 2008 he was elected a chancellor of the Academy of American Poets. He is president of the John Simon Guggenheim Memorial Foundation, and he lives in New York.
Loading...
or
Not Currently Available for Direct Purchase