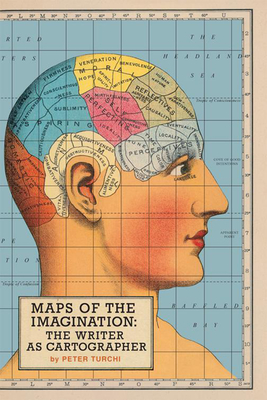 Maps of the Imagination

The Writer as Cartographer

In Maps of the Imagination, Peter Turchi posits the idea that maps help people understand where they are in the world in the same way that literature, whether realistic or experimental, attempts to explain human realities. The author explores how writers and cartographers use many of the same devices for plotting and executing their work, making crucial decisions about what to include and what to leave out, in order to get from here to there, without excess baggage or a confusing surplus of information. Turchi traces the history of maps, from their initial decorative and religious purposes to their later instructional applications. He describes how maps rely on projections in order to portray a three-dimensional world on the two-dimensional flat surface of paper, which he then relates to what writers do in projecting a literary work from the imagination onto the page.

Peter Turchi has written and coedited several books on writing fiction, including Maps of the Imagination: The Writer as Cartographer, A Muse and a Maze: Writing as Puzzle, Mystery, and Magic, A Kite in the Wind: Fiction Writers on Their Craft, and (Don't) Stop Me if You've Heard This Before and Other Essays on Writing Fiction. His stories have appeared in Ploughshares, Story, the Alaska Quarterly Review, Puerto del Sol, and the Colorado Review, among other journals. He has received numerous accolades, including fellowships from the National Endowment for the Arts and the John Simon Guggenheim Memorial Foundation. He is a professor of creative writing at the University of Houston.
Loading...
or support indie stores by buying on