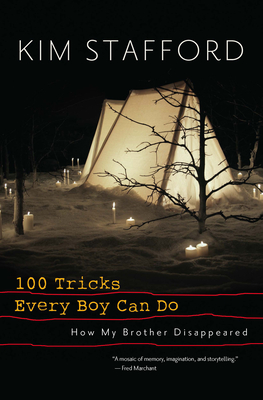 100 Tricks Every Boy Can Do

Bret and Kim Stafford, the oldest children of the poet and pacifist William Stafford, were pals. Bret was the good son, the obedient public servant, Kim the itinerant wanderer. In this family of two parent teachers, with its intermittent celebration of "talking recklessly," there was a code of silence about hard things: "Why tell what hurts?" As childhood pleasures ebbed, this reticence took its toll on Bret, unable to reveal his troubles. Against a backdrop of the 1960s -- puritan in the summer of love, pacifist in the Vietnam era -- Bret became a casualty of his interior war and took his life in 1988. 100 Tricks Every Boy Can Do casts spells in search of the lost brother: climbing the water tower to stand naked under the moon, cowboys and Indians with real bullets, breaking into church to play a serenade for God, struggling for love, and making bail. In this book, through a brother's devotions, the lost saint teaches us about depression, the tender ancestry of violence, the quest for harmonious relations, and finally the trick of joy.

Kim Stafford is a writer and teacher living in Portland, Oregon. He is the founding director of the Northwest Writing Institute, a zone for exploratory writing at Lewis & Clark College. His books include Having Everything Right: Essays of Place , The Muses Among Us: Eloquent Listening and other Pleasures of the Writer's Craft, A Thousand Friends of Rain: New & Selected Poems, and Early Morning: Remembering My Father, William Stafford.
Loading...
or
Not Currently Available for Direct Purchase