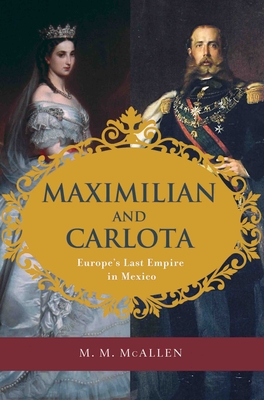 In this new telling of Mexico's Second Empire and Louis Napol on's installation of Maximilian von Habsburg and his wife, Carlota of Belgium, as the emperor and empress of Mexico, Maximilian and Carlota brings the dramatic, interesting, and tragic time of this six-year-siege to life. From 1861 to 1866, the French incorporated the armies of Austria, Belgium--including forces from Crimea to Egypt--to fight and subdue the regime of Mexico's Benito Ju rez during the time of the U.S. Civil War. France viewed this as a chance to seize Mexican territory in a moment they were convinced the Confederacy would prevail and take over Mexico. With both sides distracted in the U.S., this was their opportunity to seize territory in North America. In 1867, with aid from the United States, this movement came to a disastrous end both for the royals and for France while ushering in a new era for Mexico. In a bid to oust Ju rez, Mexican conservatives appealed to European leaders to select a monarch to run their country. Maximilian and Carlota's reign, from 1864 to 1867, was marked from the start by extravagance and ambition and ended with the execution of Maximilian by firing squad, with Carlota on the brink of madness. This epoch moment in the arc of French colonial rule, which spans North American and European history at a critical juncture on both continents, shows how Napoleon III's failure to save Maximilian disgusted Europeans and sealed his own fate. Maximilian and Carlota offers a vivid portrait of the unusual marriage of Maximilian and Carlota and of international high society and politics at this critical nineteenth-century juncture. This largely unknown era in the history of the Americas comes to life through this colorful telling of the couple's tragic reign.
or
Not Currently Available for Direct Purchase
Copyright © 2020 American Booksellers Association