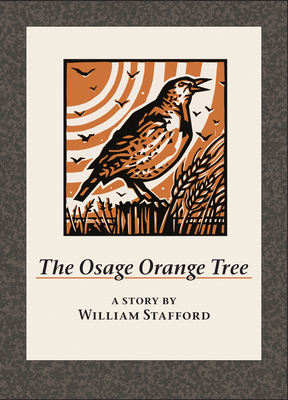 The Osage Orange Tree, a never-before-published story by beloved poet William Stafford, is about young love complicated by misunderstanding and the insecurity of adolescence, set against the backdrop of poverty brought on by the Great Depression. The narrator recalls a girl he once knew. He and Evangeline, both shy, never find the courage to speak to each other in high school. Every evening, however, Evangeline meets him at the Osage orange tree on the edge of her property. He delivers a newspaper to her, and they talk--and as the year progresses a secret friendship blossoms. This magical coming-of-age tale is brought to life through linocut illustrations by Oregon artist Dennis Cunningham, with an afterword by poet Naomi Shihab Nye, a personal friend of Stafford's. In the tradition of the work of great fiction writers like Steinbeck, O'Connor, and Welty, The Osage Orange Tree stands the test of time, not just as an ode to a place and a generation but as a testament to the resilience of a nation and the strength of the human heart.

Naomi Shihab Nye was born to a Palestinian father and an American mother and lived in Palestine, Jerusalem, and San Antonio, Texas, where she studied at Trinity University. She is the author of numerous poetry books, including You and Yours, 19 Varieties of Gazelle: Poems of the Middle East, Fuel, and Red Suitcase. Her honors include awards from the Texas Institute of Letters and the International Poetry Forum, the Carity Randall Prize, the Academy of American Poets' Lavan Award, and four Pushcart Prizes. She has been a Lannan fellow, a Guggenheim fellow, and a Witter Bynner fellow, and she was elected a chancellor of the Academy of American Poets in 2010. She has traveled to the Middle East and Asia for the U.S. Information Agency three times, promoting international goodwill through the arts. She lives in San Antonio.
Loading...
or
Not Currently Available for Direct Purchase