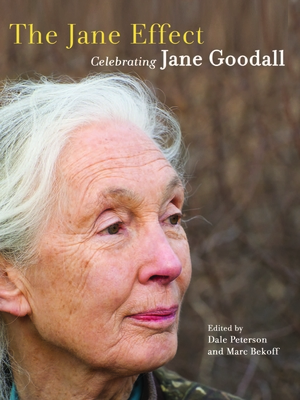 In her nearly 60-year career as a groundbreaking primatologist and a passionate conservationist, Jane Goodall has touched the hearts of millions of people. The Jane Effect: Celebrating Jane Goodall is a collection of testimonies by her friends and colleagues honoring her as a scientific pioneer, an inspiring teacher, a devoted friend, and an engaging spirit whose complex personality tends to break down usual categories. Jane Goodall is the celebrity who transcends celebrity. The distinguished scientist who's open to nonscientific ways of seeing and thinking. The human who has lived among non-humans. She is a thoughtful adult with depth and sobriety who also possesses a child's psychological immediacy and sense of wonder. She is a great scientific pioneer, and yet her pioneering work goes far beyond producing advances in scientific knowledge. The more than 100 original pieces included in this inspirational collection give us a sense of her amazing reach and the power of the "Jane effect.

Dale Peterson's twenty previous books have been named Best of the Year by the Boston Globe, the Denver Post, Discover, the Economist, the Globe and Mail, Library Journal, and the Village Voice. Two titles have been honored as Notable Book of the Year by the New York Times. Peterson is the author of the definitive biography Jane Goodall: The Woman Who Redefined Man, as well as Elephant Reflections, Giraffe Reflections, The Moral Lives of Animals, and The Ghosts of Gombe. With Jane Goodall, he coauthored Visions of Caliban: On Chimpanzees and People, and he is coeditor, with Marc Bekoff, of The Jane Effect: Celebrating Jane Goodall, published by Trinity University Press. A former fellow at the Radcliffe Institute for Advanced Study at Harvard University, Peterson teaches at Tufts University and lives in Arlington, Massachusetts.
Loading...
or support indie stores by buying on