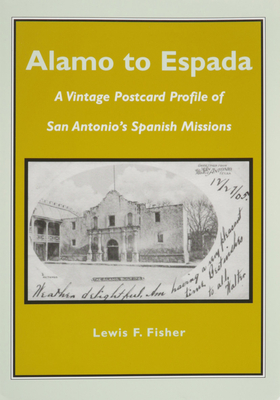 San Antonio's five Spanish missions were being pulled from the brink of destruction a century ago just as picture postcards came into vogue. Alamo to Espada features more than 150 such vintage postcards to document the progress of the dramatic transformation, as well as the far-reaching impact of these architectural and religious treasures. The focus on individual missions is expanded in one chapter to illustrate the various ways the Alamo has been remembered -- as a symbol of patriotism, place of pilgrimage and as an advertising backdrop. Another chapter gathers images of the legacy of mission architecture, showing design elements of the Alamo and other missions replicated in often unusual ways in railroad stations, hotels, beer gardens, burial parks and country clubs.

Celebrated San Antonio historian Lewis F. Fisher, whose Maverick Publishing Company was acquired by Trinity University Press in 2015, has published forty-five books on topics ranging from San Antonio's Spanish heritage to its urban development, and from the military to sports, architecture, and multicultural legends. A former member of the San Antonio River Commission, he has written numerous books himself, including Chili Queens, Hay Wagons, and Fandangos: The Spanish Plazas in Frontier San Antonio, winner of the 2015 San Antonio Conservation Society Publication Award, and Saving San Antonio: The Preservation of a Heritage, republished in a second edition, and Maverick: The American Name That Became a Legend. Fisher has received numerous local, state, and national writing awards and was named a Texas Preservation Hero by the Conservation Society in 2014.
Loading...
or
Not Currently Available for Direct Purchase