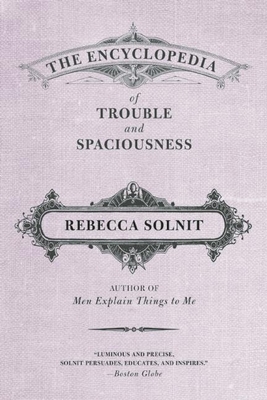 The incomparable Rebecca Solnit, author of more than a dozen acclaimed, prizewinning books of nonfiction including Men Explain Things To Me, brings the same dazzling writing to the essays in The Encyclopedia of Trouble and Spaciousness; hailed by the Los Angeles Times as globally wide-ranging and topically urgent and the Boston Globe as luminous and precise.. As the title suggests, the territory of Solnit's concerns is vast, and in her signature alchemical style she combines commentary on history, justice, war and peace, and explorations of place, art, and community, all while writing with the lyricism of a poet to achieve incandescence and wisdom. Gathered here are celebrated iconic essays along with little-known pieces that create a powerful survey of the world we live in, from the jungles of the Zapatistas in Mexico to the splendors of the Arctic. This rich collection tours places as diverse as Haiti and Iceland; movements like Occupy Wall Street and the Arab Spring; an original take on the question of who did Henry David Thoreau's laundry; and a searching look at what the hatred of country music really means. Solnit moves nimbly from Orwell to Elvis, to contemporary urban gardening to 1970s California macram and punk rock, and on to searing questions about the environment, freedom, family, class, work, and friendship. It's no wonder she's been compared in Bookforum to Susan Sontag and Annie Dillard and in the San Francisco Chronicle to Joan Didion. The Encyclopedia of Trouble and Spaciousness proves Rebecca Solnit worthy of the accolades and honors she's received. Rarely can a reader find such penetrating critiques of our time and its failures leavened with such generous heapings of hope. Solnit looks back to history and the progress of political movements to find an antidote to despair in what many feel as lost causes. In its encyclopedic reach and its generous compassion, Solnit's collection charts a way through the thickets of our complex social and political worlds. Her essays are a beacon for readers looking for alternative ideas in these imperiled times.

San Francisco writer Rebecca Solnit is the author of fifteen books about art, landscape, public and collective life, ecology, politics, hope, meandering, reverie, and memory. They include Men Explain Things To Me, The Faraway Nearby; Infinite City: A San Francisco Atlas; A Paradise Built in Hell: The Extraordinary Communities That Arise in Disaster; Storming the Gates of Paradise; A Field Guide to Getting Lost; Hope in the Dark: Untold Histories, Wild Possibilities; Wanderlust: A History of Walking; As Eve Said to the Serpent: On Landscape, Gender, and Art; and River of Shadows: Eadweard Muybridge and the Technological Wild West, for which she received a Guggenheim fellowship, the National Book Critics Circle Award in criticism, and the Lannan Literary Award. Solnit has worked with climate change, Native American land rights, antinuclear, human rights, and antiwar issues as an activist and journalist. She is a contributing editor to Harper's and a frequent contributor to the political site Tomdispatch.com and has made her living as an independent writer since 1988.
Loading...
or support indie stores by buying on