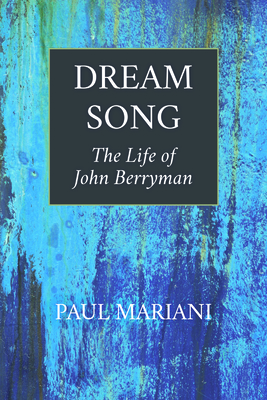 The Life of John Berryman

Dream Song is the story of John Berryman, one of the most gifted poets of a generation that included Elizabeth Bishop, Randall Jarrell, Robert Lowell, and Dylan Thomas. Using Berryman's unpublished letters and poetry, as well as interviews with those who knew him intimately, Paul Mariani captures Berryman's genius and the tragedy that dogged him, while at the same time illuminating one of the most provocative periods in American letters. Here we witness Berryman's struggles with alcohol and drugs, his obsession with women and fame, and his friendships with luminary writers of the century. Mariani creates an unforgettable portrait of a poet who, by the time of his suicide at age fifty-seven, had won a Pulitzer Prize and a National Book Award.

The oldest of seven children from a working-class background, Paul Mariani was born in New York City in 1940 and grew up there and on Long Island. He earned his bachelor's degree from Manhattan College, a Master's from Colgate University, and a PhD. from the City University of New York. He is the author of seven poetry collections, most recently, Epitaphs for the Journey: New, Selected & Revised Poems (Cascade Books, 2012) and Deaths & Transfigurations (Paraclete Press, 2005). He has published numerous books of prose, including five acclaimed biographies of poets: The Whole Harmonium: The Life of Wallace Stevens (2015); Gerard Manley Hopkins: A Life (2008); The Broken Tower: A Life of Hart Crane (1999); Lost Puritan: A Life of Robert Lowell (1994), all named New York Times Notable Books of the year; Dream Song: The Life of John Berryman (1990); and William Carlos Williams: A New World Naked (1981), which won the New Jersey Writers Award, was short-listed for an American Book Award, and was also named a New York Times Notable Book of the year. His honors include fellowships from the Guggenheim Foundation, the National Endowment for the Arts, and the National Endowment for the Humanities. He has also been shortlisted for the Tait Award for biography. He was Distinguished University Professor at the University of Massachusetts, Amherst, where he taught from 1968 until 2000, when he was named University Professor of English at Boston College. In 2009 he received the John Ciardi Award for Lifetime Achievement in Poetry. Mariani and his wife, Eileen, have three grown sons and live in western Massachusetts. He is currently working on a memoir of growing up on the mean streets of Manhattan in the 1940s. The Broken Tower, his biography of Hart Crane, was turned into a film, directed by and starring James Franco. He has also contributed to two films--one on John Berryman, and another on Wallace Stevens. He has lectured widely and read his poems here and abroad.
Loading...
or
Not Currently Available for Direct Purchase