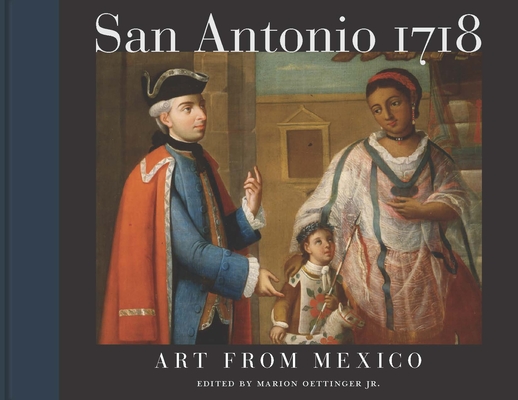 Three hundred years ago San Antonio was founded as a strategic outpost of presidios and missions on the edge of northern New Spain, imposing Spanish political and religious principles on this contested, often hostile region. The city's many Catholic missions bear architectural witness to the time of their founding, but few have walked these sites without wondering who once lived there and what they saw, valued, and thought. San Antonio 1718 presents a wealth of art that depicts a rich blending of sometimes conflicted cultures -- explorers, colonialists, and indigenous Native Americans -- and places the city's founding in context. The book is organized into three sections, accompanied by five discussions by internationally recognized scholars with expertise in key aspects of eighteenth-century northern New Spain. The first section, "People and Places," features art depicting the lives of ordinary people. Such art is rare since most painting and sculpture from this period was made in service to the church, the crown, or wealthy families. They provide compelling insight into how those living in the Spanish Colonies viewed gender, social organization, ethnicity, occupation, dress, home and workplace furnishings, and architecture. Since portraiture was the most popular genre of eighteenth-century and early nineteenth-century Mexican painting, the second section, "Cycle of Life," includes a selection of individual and family portraits representing people during different stages of life. The third and largest section is devoted to the church. Throughout the colonial period, Catholic evangelization of New Spain went hand in hand with military, economic, and political expansion. All the major religious orders--the Franciscans, the Dominicans, the Jesuits, and the Augustinians--played significant roles in proselytizing indigenous populations of northern New Spain, establishing monasteries and convents to support these efforts. In San Antonio 1718, more than 100 portraits, landscapes, religious paintings, and devotional and secular objects reveal the visual culture that reflected and supported this region's evolving world view, signaling how New Spain saw itself, its vast colonial and religious ambitions, in an age prior to the emergence of an independent Mexico and, subsequently, the state of Texas.

Marion Oettinger Jr. was the curator of Latin American Art and the former Kelso Director of the San Antonio Museum of Art. A cultural anthropologist and art historian specializing in Latin American art and culture, he has lectured throughout the United States, Europe, and Latin America. He has taught at Cornell University, Occidental College, and the University of North Carolina and is the recipient of Fulbright Hays, National Endowment for the Humanities, National Endowment for the Arts, National Geographic Society, and American Philosophical Society grants and the 2010 Van Deren Coke Lifetime Achievement Award in Spanish Colonial Art and Folk Art. Oettinger's recent books are Retratos: 2000 Years of Latin American Portraits and Pasiόn Popular: Spanish and Latin American Folk Art from the Cecere Collection. He was project director of the San Antonio 1718 exhibition.
Loading...
or support indie stores by buying on